Dunadan Minstrel - The One Ring Theoretical - Company of the Marsh Bell 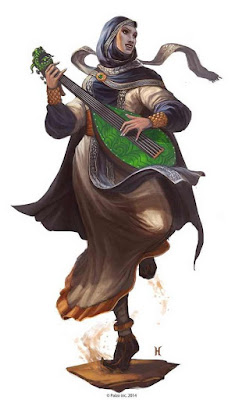 Dunadain bear a special note in that they are stronger than average culture and as a result their experience point costs are higher once the game begins. This does not affect the character creation however so let's get on to things. I like making characters a bit off the standard stereotype of a culture so I am going to make a character that is a bit more whimsical than the average ranger of the north. She is still a ranger, but she doesn't have the same burning drive that other rangers might and might fit in better with other people.

As to the hard starting things, we get the Ranger of the North cultural blessing which is Foresight of their Kindred. This grants the character an extra trait that can be used for one session out of an Adventuring Phase and recovers at the end of the adventure when you have a Fellowship Phase. So with our ranger's prophetic nature noted down let's move on. Rangers have good Awareness but it is not favored. They are decent at Stealth, Explore, Hunting, and Travel which is the favored trait of the culture. Then we have base skill in a lot of different skills: Athletics, Song, Insight, Healing, Courtesy, Battle, Persuade, and Search. The Rangers of the North are a Martial culture.

Now on to the first choice, weapons. Dunadain have two weapon tracks like all cultures, but their weapon tracks are a bit longer than others. We have the choice between having skill in all swords, favored skill in spear, plus skill in bow and dagger; or favored skill in Long Sword, skill with all bows, and skill in spear and dagger. I like spears and the focus on the long sword seems like much more focus on martial natures than normal, so we're going to go with that track.


We also have to choose her specialties two of them out of Beast-Lore, Fire-Making, Herb-Lore, Lore of Arnor, Smoking, and Story-Telling. With the idea of a wandering minstrel, I am going to look at the Lore of Arnor in order to have knowledge of all the old songs and tales of the land and Fire-Making. I considered Story-Telling and Smoking for their addition to the minstrel aspect, but she is still a wanderer so this will help with survival. Also, she is aware of the ability of fire to work against evil spirits.

Coming to Background, I'm looking at the Kingly Voice and with it the Favored skill of Insight. This gives her Attributes of Body 6, Heart 6, and Wits 5. That stat-line and the large number of starting skills are two of the ways that the Ranger of the North have a head start on most characters. But this also gives us a choice of two distinctive features out of eight: Forthright, Generous, Gruff, Hardy, Just, Lordly, Quick of Hearing, and True-Hearted. In this case, I am going with Forthright and Quick of Hearing. This describes someone with keen ears and who says what she means without being evasive.

With background chosen, let's move on toward Calling. Typical callings for Rangers are Scholar and Warden, an unusual one is Treasure-Seeker since they generally try to avoid despoiling tombs and such. None of these really fit our character here leaving us with a choice between Wanderer and Slayer. Again, we have been describing someone who doesn't have a deep personal stake in matters but is just a generally good person, so Slayer is out leaving us with Wanderer. That provides the specialty of Folk Lore, the Shadow Weakness of Wandering Madness and the choice of two Favored Skills from Custom and Survival. We're going to choose Song and Courtesy.

This is, again, another character where Wisdom seems to be more interesting for the character than Valor. So we're getting another character starting with a Virtue. There's Against the Unseen, which benefits when fighting undead and wraiths; Endurance of the Ranger, which increases the character's maximum Endurance as long as they travel light; Royalty Revealed, which makes it easier to intimidate in battle or succeed in social encounters; Rumor of the Earth, which makes hunting easier; and Ways of the Wild, which is a super-useful Virtue allowing the character to fill in for vacant roles on Journeys if they are the Guide. However, in this case, I think we're going to take one of the Masteries instead of the Cultural Virtues, in specific I am going to take Confidence which increases her starting Hope by 2.

Now, another way Dunadain get heads up is that they start with more starting experience than other characters. Specifically, they start with 14 Experience Points instead of 10. So, for this character there are five skills I want to increase and we're going to start with bring Song to 3 for 5 points. Then we're going to increase Courtesy and Persuade each to 2 for 4 points. This leaves 5 points left. We're going to bring Inspire to 2 for 3 points and have 2 points left over. I think those points will go to Awe and Craft for 1 point each.

Dunedain starting Endurance is 23 + Heart giving her 29 Endurance and their starting Hope is 8 + Heart for 14. However, because of the Confidence mastery we took, that increases again to 16. This is quite a bit of Hope, not quite to the level of a hobbit but great among men and elves. Her Endurance is also quite high for most groups, being close to weaker dwarves. So let's move on to gear.

I am going to give her a bow, mostly for hunting, a dagger, and a spear. That's 3 Encumbrance. I think I am then going to give her a shield and leather corslet. That's another 11 Encumbrance for a total of 14. This is just barely enough to fit within the Endurance of the Ranger Virtue, though she doesn't have that ability yet so there's no effect. In any case, that puts her starting Fatigue at 14 as well.


Berwen has been raised with the knowledge of the Enemy and like her kin, she would see it destroyed, but she doesn't have the burning drive that most associate with the dunadain. Her driving motivation is to see the world and experience all the many cultures that exist in this wonderful world. If her wanderings could help preserve these folk against the Shadow that's wonderful. If the only thing she gets is to see it all before it is destroyed, then at least there's that much she gains out of it. At one point she was assigned to the new cordon of rangers watching the borders of the Shire, which came to a mild but of surprise and embarrassment when one of the Bucklander Foresters stepped into her camp without warning and sat down with her.