Woodman Healer - The One Ring Theoretical - Company of the Marsh Bell 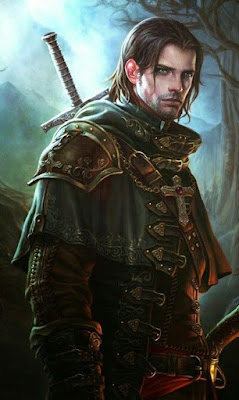 As to the culture, Woodmen get the Cultural Blessing of Woodcrafty which means that when they're in a forested area they use their Favored Wits for their Parry instead of their Basic Wits. As for starting skills, Woodmen have good Explore and Healing, with Healing being favored. They have decent Athletics, Stealth, Awareness, and Hunting. They basic skills in Inspire, Song, Craft, Riddle, and Battle. Woodmen are a Frugal culture.

For starting traits, the Woodmen have the following six to choose from: Anduin-Lore, Beast-Lore, Fishing, Herb-Lore, Leechcraft, and Mirkwood Lore. For that I think I will do Leechcraft due to looking ahead towards more healer stuff and Mirkwood Lore just for survival purposes. Mirkwood is an extremely useful trait to have when you're looking at adventuring in the Wilderland.


For background I am looking toward the Seeker set which gives favored Athletics and sets attributes to Body 2, Heart 5, and Wits 7. This will also give the option of two out of the following traits: Adventurous, Bold, Curious, Determined, Eager, Generous, Reckless, and Swift. I think I am going to go for Curious and Generous.

For Calling we're going to look at a Treasure-Hunter. This is a young man who has gone out to seek his fortune, the fact that he is most skilled with healing is just circumstantial to his mind and anyway, adventurers need healers. He is of good sort, mostly motivated by just curiosity and when he does find stuff he has a tendency to give it away, but there is a not of greed buried within. This calling does give him the Burglary specialty and Dragon-Sickness as a Shadow Weakness. He also gets a choice of two more favored skills out of Movement and Perception. That will be Stealth and Search.

Looking at the choice between Valor and Wisdom is interesting, taking Wisdom would allow me to get Staunching Song immediately, but I think I will go for Wisdom instead as he is a bit of a reckless sort. As to the Reward, the cultural rewards for Woodmen include a Bearded Axe which lets you sacrifice damage bonus to instead break shields or disarm people on a great success; Feathered Armor, which gives you stealth bonuses; and a Shepherd's Bow which is just a very strong bow. I think I am going to go ahead and grab the Bearded Axe since his damage bonus isn't too much (due to the low Body).

For Favored Attributes, I am going to add +3 to Wits, +2 to Heart, and +1 to Body. This brings their favored Attribute levels to Favored Body3, Favored Heart 7, and Favored Wits 10.

Coming to Gear, we have the Bearded Axe which is a Long-Hafted Axe and a Dagger. That's 3 Encumbrance so far. As to armor, I think will go for Leather Shirt at 8 Encumbrance. The question of a shield comes up. Long-Hafted Axes can be used either one or two-handed so it is something to consider. Also, this is a high Parry character so the shield would just make that better. With that said, that brings my Fatigue fairly high up to where it'll be easy to get Weary. On the other hand, I could drop the corslet to a shirt and then take a shield for a total Encumbrance of 10, which sounds like a good way to go.

Evoric's father was a healer in Woodland Hall and raised his son to the trade. He was diligent in his studies, but his curiosity always drew him further and further afield. Tales of lost fortifications or buildings within the forests always got him interested and he constantly hoped to find something. This caused his father to set tight rules against such wanderer. Unfortunately, this only whet the young man's appetite and when the dragon was slain soon after he became an adult, there was nothing his father could do to stop his son from heading East to see what he would find in Esgaroth and Dale. The young man has even taken to shaving his face clean as the Bardings and Lake-Folk due, to the consternation of his kin.

Rewards: Bearded Axe
Virtues: None yet