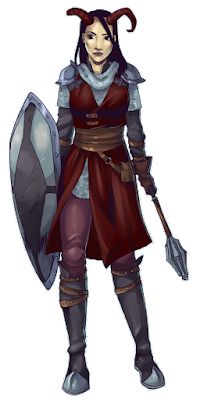 Shard is a character I made for a 4e game around seven years ago and have never gotten a chance to play. I'll be playing her coming up in a 5e game sometime this year or next run by a friend of mine after an MotW game of mine runs through. Originally, she was a fighter with a bit of Warlord in order to simulate that tough NCO type character. She's a very taciturn individual that doesn't say much unless she has to.

Oddly enough, when my brother and I were each making our two characters for this game, we both got one really awesome set of rolls and one rather mediocre set. Shard is my character that rolled just about as well as I could have expected. The character who rolled a bit more poorly is another character that will be statted, though even in her case, she doesn't have any stats that are abyssmal.

Shard went into the military of her nation in order to provide money for the caretaking of her siblings. She is the daughter of a priestess of a love goddess and has several brothers and sisters. Mostly human, but a couple of others with non-human ancestry as well. Her mother vanished while on temple business years ago. Shard herself is more faithful to the goddess of civilization but respects her mother's faith.
Read more of my blather »
at January 22, 2016 No comments:

When I have time later and the inclination to look into licensing issues, I can see about translating Idun into a setting. I also have to check to see about my ownership of the setting with the person who bought the short stories even though their website never launched.
Read more of my blather »
at January 08, 2016 1 comment: