The Kitsune Impersonator is a school available to players via the Emerald Empire sourcebook. I thought it would be a member of the Kitsune family, but instead it is an actual kitsune, fox spirit. You choose your family and clan as normal, but this is a false identity. Kitsune are neutral or benevolent in nature and sometimes hang around for various reasons, including marrying mortals. The kitsune gets fewer skills and less choice in technique than other schools, but has really useful school abilities. It is important to note that in the lore of this setting, children born of a kitsune and mortal are mortal. There are several families that have intermarried frequently with spirits.
Read more of my blather »
at July 31, 2019 No comments:

The Phoenix are most well known for their magical talents and preference for peaceful resolutions, but they have their armies and their warriors like any Clan. They simply prefer not to use them.
Read more of my blather »
at July 31, 2019 No comments:

This is not the first time I theory-crafted a blind character for Legend of Five Rings or otherwise addressed the question of playing a blind character in a tabletop roleplaying game. As I am currently working also working on the gorgon archer theoretical for this game's edition, I decided to create a few comrades for her before I moved on to doing the theoretical advancement for the character. In any case, on to the twenty questions.
Read more of my blather »
at July 31, 2019 No comments:

The 5th edition of the game involves some very different mechanics than what came from earliereditions. I looked at 4th Edition already on another post. Now there are some similar structures. You choose a Clan, you choose a Family, and then you choose a School. There's also a twenty questions structure to the character creation. However, while the previous editions used the twenty questions as purely a way to fill out your character's personality and backstory, this edition ties the twenty questions into the mechanics as well. As with 4th edition, we can't really do a legitimate gorgon and have it make narrative sense. If the naga were available it would be a different issue, but we don't have that.

In addition, this new edition set back the timeline to before the Scorpion Coup and the core book does not include stats for any of the minor clans. As such, I do not have access to the Tsuruchi Archer school yet. There is, however, the Kaito Shrine Keeper which is an archer monk that does magic stuff with their archery. A further note of the lack of Minor Clans means no Snake Clan stats. So I can't make them a pariah by birth so much the way I did with the 4th edition character.

Bearer of Calamities - Variant Human Hexblade, Pact of the Tome 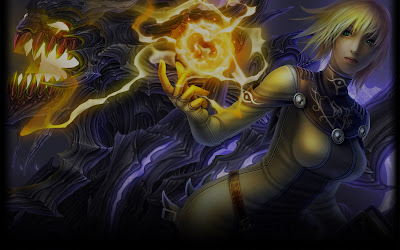 Anime: Gate of Memories is an third person fighting game with a lot of roleplaying game elements. It is based on a French tabletop RPG called Anima about which I don't have much knowledge more than that the art is full of inhumanly slender, long-limbed, and impossibly proportioned people and bizarre monsters and that the books are quite expensive.

I've been curious so I decided to pick this game up a while back to see if I could get some sense for the setting. However, it is a highly focused scenario and you don't get to build your own character. That gives a moderately limited idea of what is happening, but the character you are given made me think of a D&D warlock for obvious reasons. Eventually, I pondered that she seemed to most resemble a Hexblade who had taken the Pact of the Tome.

As a note, she finds and equips weapons, but the weapons just sort of increase her stats. They don't change her fighting style at all, so I tend to assume that regardless of what item she equips, it is subsumed into the flashes of energy that she uses when she fights. Also, she can switch places with her Patron, Ergo, they share a magic pool but have different health levels. However, I'm not sure how the different health levels would be represented, so I would have Ergo appear mostly as a fluff.

I'm going with a Faction Agent for background due to her associations with the Order of Nathanial and Variant Human for race. 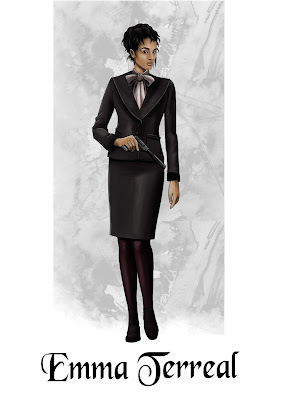 This is a rebuild of this character I played as a Geist from the 1st edition game.

In the Player's Handbook section on alignment on page 122 there is a paragraph that reads: 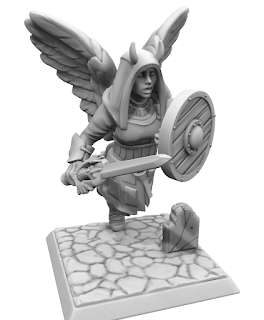 Now, despite the fact that it says "it does not choose" earlier on, the last line of that paragraph that interests me the most. We know that celestials have become fiends due to their choices such as Zariel who is now one of the Archdevils and rules the 1st of the Nine Hells. And there have been past discussions of fiends that rose to be celestials, also due to their choices, such as Eludecia who was a succubus paladin who had been made for the D&D fight club back in the days of 3rd edition. We also know that a lot of devils and demons had previously been mortals and, in fact, a lot of the involvement of the fiends with mortals is geared toward collecting recruits for the eternal Blood War. 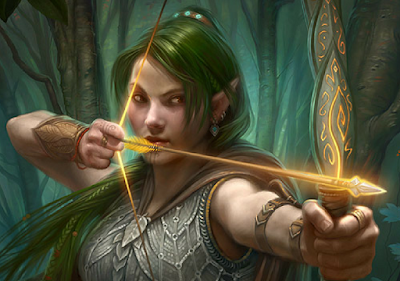 I've wanted to do a Divine Archer for a while now and had been focused on the Paladin due to Divine Smite. This is especially true once I heard that the Smite ability was limited to melee only for flavor reasons rather than balance.

However, when I started to think through a subclass I came to realize that it just doesn't work because the bulk of the Paladin features synergize very well with melee and almost not at all with ranged attacks.

Perhaps you could choose to sit near the other back rank members of your party, but that invites AoE targeting, so it's not exactly best practices. So I started looking at other options. Ranger and Arcane Archer are frequently where I'm pointed to as a way to do this. Both have some really good archery enhancements and spells. However, they just don't have the feel of what I'm looking for. Similarly, Clerics also don't really work because they don't have many options on how to enhance archery beyond some basic weapon enhancement. Then I recalled that Warlock could get blade pact archers via Improved Pact Weapon and Smite via Eldritch Smite. So that is the direction I am going.

Summary of the various classes in Dungeons and Dragons 5e

Okay, I've retyped this a few times on the Dungeons and Dragons 5e Facebook group, so I'm making good on my threat to type this out and I'm going to expand upon it a little bit.