Watch Reports: "Zompires", Homesteads, and the Shape of Magic

We left in the morning alongside several members of the Order of the Silver Oak. A halfling by the name of Belvon wielding a longbow that seemed a bit over-sized in his hands, a half-orc by the name of Ulag who seemed to be some sort of priest of Obad-Hai, a firbolg medic by the name of Yeswynn, our friend Nikola and the leader of the group herself, Elanil. Since she appears to be coming with us, it feels like I should actually use her name in these watch reports. It seems only polite to do so.
Read more of my blather »
at June 27, 2017 No comments:

This summer in August, I'm planning to run seven separate scenarios three times each. The listed times are Japan's timezone (GMT +9) but the videos at the end give times for US Pacific, US Central, Belfast, and Helsinki. My first general announcement video is linked at the bottom.

The remaining passage through the forest to the Monastery of the Silver Oak went with surprisingly little trouble. After the satyr parted ways with us and we’d considered the potential benefits of butchering the wolves for stew the next day to spare some of the burden on our store of rations. But there were no other dangers that we faced until we reached the monastery which is where we found some oddities. 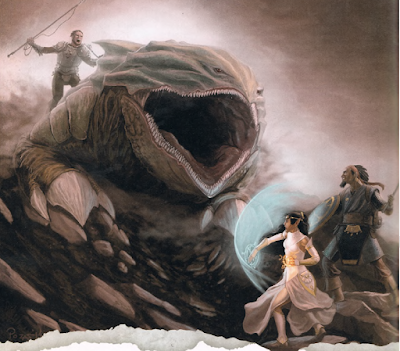 
Caravan delivered safely to its destination;
The band turned its attention elswhere;
Though before they could get much libation;
Of an Enclave request the paladin was made aware.
Read more of my blather »
at June 18, 2017 No comments:

The basic concept here is that someone has been affected by a blast of transformative magic that is slowly changing them into something progressively less human. This is based on the idea of the elemental snake person art I had commissioned a long while back. There are a couple of different ways that this can be represented including Warlock and Sorcerer, but I am going with the Four Elements Monk for this case.

Normally, Monk represents a character that has received training in some arcane discipline that allows them to develop incredible physical abilities. In this case, however, the abilities like the martial arts, unarmed damage and the like are based on the idea that the character is physically transforming from what she used to be into something else.

The elemental marilith (marilith in appearance, but elemental rather than fiendish in nature) is just one option, this concept could be done towards other transformations as well.
Read more of my blather »
at June 14, 2017 No comments:

Trolls and Ghosts - The Journal of Aisha Yethtai 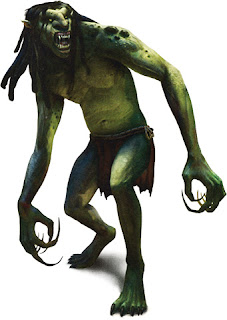 I am getting tired of having to leave behind situations in order to attend to other matters. The matter in Noanar Hold rankles at my principles, but as it currently stands I am not equipped to handle the situation and the locals are equipped to survive it as it currently stands. Still, I am concerned that the delivery we made may have been in aid to the troubles at that settlement, but I am getting ahead of myself and it is best to recount these events in proper order.

We came from seeing to the atrocity at the village near the Evermoors which the ogres had ransacked. Moving to the settlement of the Calling Horns we encountered Lady Tamalin Zoar who ran the inn and provided protection to the surrounding area by collecting small taxes and using it to pay the mercenaries that passed through for their services. The Lady has the makings of founding a good and respected noble line. I think I will see about doing what I can to help her secure her demesne. As the region becomes more populated it is likely she will come under external pressures.
Read more of my blather »
at June 11, 2017 No comments: 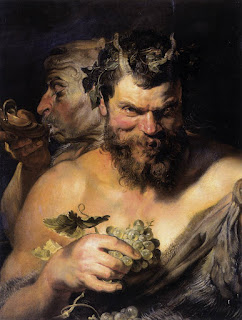 As we sit down to camp, following the events of the journey to this point, I have to bring up some matters of concern especially in light of the current situation. Granted, I am aware that it is likely these reports will not get back to Athlin to be seen by anyone. Even if they do get back, it is likely that the ramifications may have already been suffered.

First of all, I would like to note that the dwarven barkeep has apparently withdrawn from his participation in this quest, but instead we have been joined by a half-orc women of a rather curious dialect of the common tongue. A number of the words are unfamiliar to me. For example, I have never heard either of the terms "bros" or "broettes" before. I think they are some manner of honorific and seem to have a friendly implication so for now I will take them as a term of respect. In any case, the half-orc is apparently a paladin of Tymora, so we have some formidable martial talent on our side now.
Read more of my blather »
at June 11, 2017 No comments: