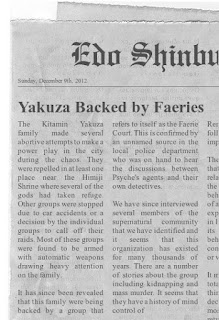 With the police turned off for the moment, hopefully giving the diplomatic agents of Psyche time to arrange something with the official government. In the meantime, Sophia has noticed that there are some motorcades being put together by the same yakuza family that they'd had trouble with in the past. These cars were moving toward various trouble spots in the city, probably trying to secure their own power in the midst of the chaos. Some of these cars are heading their direction while others are heading for areas of the city owned by the Seimei sorcerer family.

Sophia warns the other interns about the incoming hostiles while trying to get word out to the Community and the Seimei as a way to hold off another major incident if the Seimei were to react violently. Meanwhile Katie, Aria and Sarah start working on beefing up the defenses around the shrine.

Aria spends sometime moving between the trees and using her biokinesis to alter the make-up of several trees in order to make them into massive acid landmines. When she is done, the steep hillsides of her side of the shrine is littered with trees that will burst into a tide of acid at the slightest touch. There is a slight difference to the appearance of these trees, but for the most part they are well hidden.

Katie borrows some breaching charges and other explosives from Aria's car and rigs up the other side of the hill with explosives set to create a small landslide falling down on any intruders trying to get up that direction. The charges are easily visible and she doesn't have time to conceal them better, but hopefully that will serve as deterrence on its own.

Sarah made efforts to litter the road with car-caltrops and spike strips improvised out of existing rubble and metal. Unfortunately, she wasn't able to produce much in the way of good spikes or defenses. She ends up retreating back into her tree with a bull bar and settles in to weight for the yakuza to arrive.

Sophia manages to successfully delay the yakuza by hacking into their cars' computers and causing mechanical difficulties while she contacts various Communities. Her delays aren't enough to completely stall the motorcades and they're easily cleared, but she is able to convince people that the danger is real and start moving off the non-combatants so that there is less chance of passions getting enflamed.

Three cars come up to the parking lot of the shrine and the mob of yakuza, some armed with automatic weapons, see the barrier that the group had created out of cars earlier and start calling out that they're there to take charge and "make sure everybody is safe."  Aria returns that they have everything under control and to please leave off. The yakuza's response is to take a shot at her, missing in the trees.

One of the groups of thugs starts charging into the woods to engage the succubus en masse and fail to realize that some of the trees are different. As they start working up the steep slopes, they reach out to steady themselves on the trees and trigger a series of bursts sending a small torrent of acid and dissolving wood flowing down the hill and settling at the edge of the parking lot along with the dissolved bodies of the troop of yakuza.
A particularly competent looking yakuza charges to the edge of the trees, looking a lot more careful than the thugs that were just eliminated. He takes a few shots at Aria and manages to get close a few times.

Katie had been using her telepathic abilities to hide in plain sight at the barrier and, at that time, she pops up and starts taking shots at the enemies. Aria engages the yakuza leader at the edge of the trees, tossing him into her trapped forest. He slams into a tree but is able to dodge out of the way though takes a severe acid burn doing so. Sarah meanwhile tosses her bull bar out and manages to clip the shoulder of one of the leaders.

The thugs then act, one group trying to get around the barrier to engage with Katie while the other tries to move into the hills on Sarah's side where Katie had set up the breaching charges. The thug of the group armed with a rifle takes some shots at where he thinks Sarah is while the rest of the thugs try to climb the hill. Meanwhile an authoritative looking yakuza starts taking shots at Katie and trying to call for reinforcements on his phone.

Sarah notes the yakuza leader calling for reinforcements and also sees some motorcades starting to change direction and head their way. To shut down any further reinforcements, she uses her computer skills to hack into the leader's phone and tamper with its power regulation abilities causing the battery to overload and explode next to his face giving him the Two-Face treatment but he manages to live. 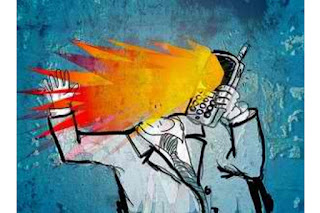 The yakuza Aria threw into the trees takes several shots at her, some of the bullets pierce through the illusory shoulder of her "demon form", cracking the telekinetic shell and passing a bare inch past her real face. Another slams into the armor she wears underneath, but the armor prevents her from taking serious injury.

Katie backs away from the barrier, struggling up the hill to get to the prepared defensive position near where Sarah is. She loses a little bit of skin but manages to get above the breaching charges.  She triggers the charges sending a landslide down the slope into the band of thugs below and causing several to be knocked out or drop weapons.

Aria meanwhile moves forward, laying a hand on the unburned side of the yakuza leader's before slamming her other hand to meet it and crushing his head like an old pumpkin between the telekinetic constructs. Sarah leaps down from her tree, bounces off the barrier and lands among the thugs while shapeshifting with perfect fluidity mid leap so that she could tear into them as a panther, taking down several of them.

The group of thugs frantically attacks the panther in their midst causing Sarah to have to back away as she takes several solid blows. Another group tries to climb up the hill that Katie just dropped on them and fail to get past the obstacle, settling for taking a couple of shots at Katie instead though nothing lands.

Sophia directs her attention to the incoming reinforcements. She repeats her trick of tampering with the computer controlled brakes, but doesn't bother to hold back this time. She goes for the biggest wreck she can get. targeting the head of one motorcade. The driver fails to account for the sudden locking of the brakes on the icy December streets and slams to just on the edge of a bridge. The car behind that fails to stop in time, skidding on the streets and slamming into the back of the first car, dumping it into the river. The third car manages to avoid a crash by dumping into a snow drift.

The remaining yakuza leader calls out Aria, shooting wildly at her as he stands at the edge of the parking lot. Aria responds by extending the telekinetic form of her arms to reach out and grab the man. Instead he ducks and she ends up grabbing one of the acid trees behind him, pulling it back slamming into herself and causing it to splash all over herself, Sarah and the thugs around her. Sarah manages to shield herself behind some of the thugs who get obliterated by this while Aria watches some of the acid leaking through some of the gaps in her telekinetic shell.

Katie takes several shots at the thugs below her but spends most of her focus on taking cover. Below her the thugs make another attempt to come up to her position so they can engage her with the bulk of their numbers. However, they fail spectacularly, triggering a new landslide that knocks out their gun man leaving the rest of the group to spend their time looking for the rifle and managing to find it in the clutter. Sarah takes her action to menace the remaining yakuza leader, stalking him coolly as an angry and bloody looking panther.

Sophia repeats her assault on the second motorcade of incoming reinforcements. This time, the lead driver succeeds in diverting his car harmless into a snow bank when the brakes lock, but the drivers behind him are less skilled and one of the two drivers headlong into a gasoline stand causing an impressive explosion.

The remaining yakuza leader starts making a break for the cars Sarah and Aria move to block him and he manages to get past them but not close enough to the cars to attempt a get away. Katie pops out of cover and manages to shoot the remaining yakuza menacing her in the knees, taking them out of the situation. Aria meanwhile unfolds her acid-covered demon-form and wraps it around the fleeing yakuza, thoroughly eliminating him from the scene.

Sophia then collects some of her video and transmits it to the various yakuza heading for different parts of town with the message "Just go home." 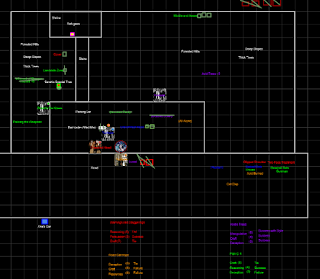 This was a good bit of fighting to cap off this segment. I almost included the small session we had after this, but it is sufficiently different that I think I'll leave that for later and simply combine the session report for the next two sessions.

Aria's armor and demon-form telekinetic shell combine to give her a lot of resistance to physical damage. Even so, she almost suffered real injury this time. The group does really well in combat, but that was the intent of this group in the first place. All in all, these characters are a lot more confident in battle than the groups these players ran in the previous two campaigns.

After this, I plan to have the groups help in the hunting of Adelheid Kuroiki who is one of my major villains in the setting. Fortunately, due to Kuroiki's nature, she's someone that needs to have several groups hunting her simultaneously. In the midst of that they will still be getting called in to put out fires here and there.
at December 09, 2016