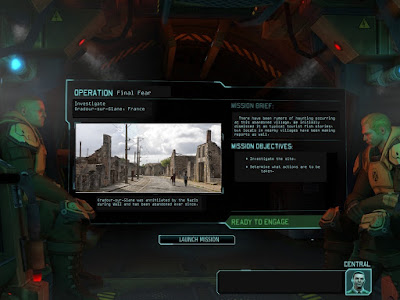 A few months after the occurrence in Edinburgh Kasper Sierzant is facing a lot of interviews regarding his behaviors and choices in recent days. This is part of a growing trend in the agent to move away from a field agent position and on to being an over-all command role. As such, when an order comes in for the team to investigate stories of hauntings around the French village, Oradour-sur-Glane, that has been abandoned since an infamous massacre during the days following Operation Overlord. The abandoned village has seen the occasional tourist but it hasn't shown much sign of haunting or the like until very recently. The M-Com command would have dismissed it except for the increasing number of stories being told by locals to the area.

Katkemat and Thomas are dispatched to investigate the area with newly promoted Lieutenant Daley in charge with Sierzant remaining in Romania dealing with paperwork and administrative stuff as well as the search for Inspector Marisa Carracci.

The team arrives in the area and decides to start with interviewing local witnesses. They come to the conclusion that only one person at a time is seeing these ghosts. This is further confirmed when they talk to a farmer who first takes them for being amateur ghost hunters looking to beef up their YouTube presence. Despite the fact that Daley is much more charismatic than her boss, Sierzant the man remains recalcitrant until Thomas takes over the talking and starts turning up the youthful charm available to a powerful mystical entity appearing as a twelve-year old kid.

The farmer recounts an encounter with an injured villager trying to escape a massacre by the occupying German forces. The confused and scared farmer tried to offer help, resistant at first to the idea that it was a ghost, but then the injured man simply vanished while his back was turned. It seemed so very real but apparently his own son was also present and never saw anything happening. And then, there was a sound of childlike giggling when the ghost of the villager vanished.

Katkemat decides to speak to the local spirits and learns that there has been a rude "visitor" that has been latching onto the humans around here. The people that are seeing the ghost are the ones that this outsider spirit has been attaching to. It becomes clear that some spirit is playing practical jokes on the area.

Heading to the actual village, Thomas and Katkemat begin forming a massive area to seal in the spirits within the area so that they can find the spirit in question. Shinriki helps by keeping the spirits of the area herded into the region and making sure that they don't escape.

Katkemat's investigation along with Daley and Mills has found that someone has been modifying the area to form some sort of odd bubble in reality that is shielding the area from the effects of the dimensional instability that they've been seeing growing in other parts of the world. She has found that it is centered on the area of the church at the middle of town.

In the course of drawing the circular ward, Thomas seems to draw some attention and begins to see what looks like a soldier moving to attack Katkemat. The position of the soldier seemed to be moving in bizarre and sketchy ways trying to form the center point in a line between Katkemat and Thomas. Thomas moves to attack this strange soldier from an odd angle, causing it to vanish and disappear with the sound of a familiar girl's voice saying "you're no fun."

Then Katkemat turns about and directs Shinriki to grab the Spooky Girl by her clothes and pull her out from Thomas's body. This led to an interview with the spirit, the same one that helped them in Belarus. To aid the interview, Daley used her psychic powers to help get into the girl's mind and convince the girl to work with them. As a focus, she taps out the rhythm to "I'll be Watching You" and "Don't you forget about me" in alternating sequence.

The Spooky Girl notes that she is basically a tourist and was attracted to the area by its relative stability. Upon discovering that she couldn't get into the secured area, she decided to start amusing herself with pranks on the locals. Katkemat chastises the girl who promises to be good.

They then begin working at looking for security around the church and find several technological and supernatural security devices, including a laser tripwire that Katkemat almost passes through before Price and Campbell disable it. They eventually find a trapdoor in the center of the church leading to an extradimensional sanctum. After some concern, Katkemat confirms that this is a rather neutral sort of magic used by many sorcerers both good and evil.

Within they find a very minimal shelter with three rooms and some basic rations stockpiled. There's also a small library of scrolls written in archaic Japanese in which they find some very useful information. They confirm that this safe haven was basically a test case performed by Kurata Hikozaemon to create a place where the destabilization of the rest of reality is held at bay. It requires a huge amount of energy however, and Kurata determined that a massive sacrifice of life would work to establish it with minimal effort. In order to conceal his effort, he made use of his time magic to fuel the establishment of the small haven via channeling the powers of the death that occurred in the tragic massacre of the past. Unfortunately, Mills eagerness to investigate results in one of the scrolls crumbling to dust in her hands.

They reason that there is likely a larger haven somewhere from which he is operating. After some discussion, it is decided to leave the place with the appearance of being untouched in hopes that Hikozaemon will never realize they had been there. There is a brief encounter with some French officials, but calls back to M-Com command and further pressure via their Interpol connections insure that their presence at the place is never recorded. For extra security, Daley wipes the memories of the event from the two officers that spoke to them.

Meanwhile, back at Romania, Kasper has discovered that Inspector Carracci has completely gone off the grid and can't find anything about her current position at all. Though they do confirm that she his hunting down the crystal remains of the victims from Operation Private Priest.