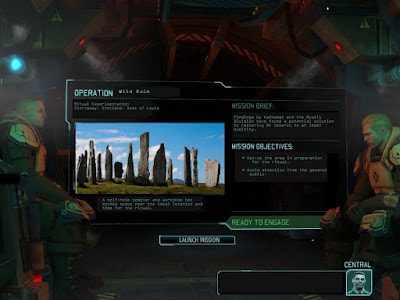 While Kasper and Thomas attend to various investigations and security details, Katkemat is set to attempt to at least partially cure Rookie Narciso Valerio's crystalization issue. She has opted to use one of the ley-line nexi at Stornaway, Scotland and performing the ritual on March 23rd, the Spring Equinox. Unfortunately, she failed to properly fill out the online form needed to requisition a full team for the mission. She protested that "I spoke at your form. I told it what I needed. I said submit. Why do I not have a team and resources?" But apparently this did not convince the bureaucrats.

With a fair amount of the M-Com Magical Division disappointed that they would not be going, Katkemat set out with her brother, the spirit wolf Shinriki along with some of Kasper's team: the demolitions expert Corporal Crista Price, the occultist Ginger Mills, and the para-biologist Katherine Richards. Katkemat is going to need to attune to the site and have helpers on hand as well as ritual items. The ceremony will take two hours and they determine that the best time for that would be run from one hour before to one hour after midnight when the Equinox was at its most balanced.

Unfortunately, there is some sort of large group of people attending a self-help seminar which is flooding the different sites. Price helps get the group through by telling the authorities and site staff that they're a sort of paranormal documentary crew and that Katkemat is the "resident weirdo." She further heavily implies that any damage to the crystal statue that is Narciso would come with a very hefty lawsuit as a way to make sure the staff are very careful not to damage it. Rather than staying at a hotel, they decide to take the mobile crime lab, which Price has made to look like a documentary vehicle (who the hell knows what happened to the arsenal but she assures them that the weapons and explosives are still present.) Katkemat notes that the dimensional instability around the area was heavier than in other places, making dimensional events a danger and thus further cementing her position as the resident weirdo.

Shinriki goes on watch the first night with Price setting up some perimeter gear as well. Katkemat sort of complains that the crime lab and its bunks, heaters and working toilet are rather decadent but also immediately asserts that she does plan to sleep in it. The next day, they take a closer look at the Callanish Stones and note that sometime in the intervening centuries a tomb of sort was added to the center of the stone circles, making the more famous site quite a bit less ideal for the ritual. She instead opts to hold the ritual at one of the other stone sites. It is nearer to the ocean and a bit further north meaning that they might have a bit more weather but it will still be better for granting the crystalized form animation as well as retying Narciso's soul to the crystal so that she has control over it.

Price and Richards do some interviewing about the site trying to make sure that there would be no surprises from the self-help people and learn that the guru plans to hold a seance coming up. Given the dimensional instability of the place, this is immediately concerning.