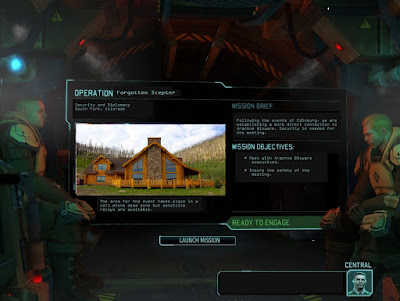 
Agent Sierzant assigned Thomas Riley to take on the mission at South Fork, Colorado in the United States in order to head up the security situation in a meeting between M-Com and Arachne Bioware. Thomas and Kasper managed to arrange for him to have substantial back-up in the form of a 3-man tac-team and a 4-man surveillance team. In route, Thomas had a prophetic vision about the coming of a hurricane strength storm at the sight in the middle of Colorado.

Upon arriving he identified four types of arachne, including several near-human ones supported by some with thick, dark skin and wearing sunglasses to conceal multi-faceted eyes. There were also three with six arms who seemed to be psychics in the vein of Lt Daley and some more drider-like types who, similar to the villainous Dr. Popov, appeared to be scientists. He managed to successfully convince both his people and the arachne security staff that he had had a legitimate prophecy.

Working with Mr. Isaak Bia, the arachne security head, they decided that if a supernatural attack was on the way, that it would be too difficult to defend everyone if they were staying in the various guest cabins as had been originally planned. As such, they decided to put both parties in the main activity facility where they only had one building to defend. There was some disagreement from the negotiators on both side. Agent Harrison was especially annoyed with the twelve-year old supernatural killing machine making his job more difficult as now he and his team had to make their preparations where the other side in negotiations might stumble upon them. The Spooky Girl moved about, looking for signs of other spirits but didn't seem to find much in the way of unusual spiritual activity.

Later, as Thomas was getting set to draw a layered set of magical wards about the central building, he was approached by someone who appeared to be acting as a secretary for one Katya Chen a near-human arachne whom Thomas took as the overall leader of the group even though she wasn't the active negotiator. Strangely, while most of the arachne had Russian or East-Asian appearances, this woman looked distinctly Mediterranean in features. He exchanged the plans with her and she nodded along and warned for him not to kill any spiders he might see, offering to give him a shawl or something against the evening chill of late-spring Colorado. Thomas sort of shrugged and accepted the offer before taking his chain sword and drawing a series of warding circles about the building.

As he finished, he watched the Spooky Girl's form come sort of into visibility. Translucent, but not at least something more than just a vaguely present voice. She proved to look about his age and dressed in a sleeveless shirt with a jacket or sweater tied about her waist and wearing a pair of khakis. She also had the tattoo of a spear on one arm very much similar to the mark that Thomas had when he was hiding his chain-sword in his body.

Thomas engaged her in conversation, revealing that he could see her and referring to her as some sort of projection. She reacted in surprise before recovering and stating that he wasn't far wrong. He had some conversation with her and asked her about the name of her spear. She pulled it out of her arm and noted that it was pretty useless to her where she was but swung it around a few times and noting that "This friend is Blood." They had some further conversation and he noted that they had plenty of time to talk later to which she responded that "time wasn't what it used to be." Afterwards, the secondary returned and brought along a shawl of wonderfully woven silk which he gratefully accepted.

Soon, the prophesied storm arrived and struck the edge of the Thomas's words in a brilliant light show of clashing magic and as well as wind and lightning. He made another contact with Mr. Bia and relayed the situation and assured the man that he wouldn't be hurting any spiders and had instructed his team likewise. The arachne looked a bit confused at the offering and when Thomas tried to point out the secretary, he couldn't see her despite the fact that she had just been there.

Pushing that strangeness off, Thomas worked upstairs toward the roof to look at where the storm raged just outside his wards. Oddly, he found that his magical perceptions were exceptionally attuned and even seemed to viewing everything the manner of a sort of weaving of threads. He especially noted where his wards seemed to be perfectly woven into the natural fabric of the world around the building.

With the help of this supernatural clarity, he saw an approaching silhouette that was largely than a person but still human shaped. He warned people and decided to engage the oncoming enemy outside the ward. Swooping down, he knocked the form off balance before being slammed by the wind through the walls of one of the guest cabins stuck in the wind. Sniper fire supported him also knocking the figure down which fell with a metallic crash.

Investigating further, Thomas found what seemed to be a huge, magically active robot type thing which seemed mostly deactivated now. He tried to force the apparent golem to respond to him as he disconnected the lines of power and collected the core. But when the golem failed to response he finally took it apart finding a shard of silver crystal in the center just as one of the broken mirrors in the guest house started flickering oddly before a crystal mantid started pulling itself into the world.