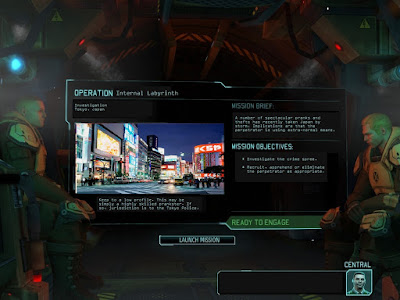 As he dives and pushes the targeted young prankster, Kasper goes to grab his gun. Unfortunately, the impact of the bullet jars him and the pistol goes scattering across the floor and kicked away by some of the bystanders going for cover as they realize that someone just took a shot through a plate-glass window. He gets the group around into one of the shops away from the line of fire and starts considering the situation.

Realizing that the sniper might not be working alone and that at least a second one might be lining up to target the concert, he gives a warning to Daley and tells Campbell and O'Neil to clear out of the area. Getting the young magic-users to focus, he guides the group quietly across to a clothing store, seeking a dressing room and the mirror within since they can't safely get to the wall-mirror that they had been standing near before. As they do so, he sees the obvious response team working with the sniper on the way in.

Kasper is concerned to hear the approaching tac team call out to "Don't let M-Com take them! We don't know how much they know." The idea that they're aware of who M-Com is speaks volumes to him.

The young man, the one who had been watching, opens a portal allowing Daley to come into the scene to join them. Kasper calls for her side-arm and she willingly removes her pistol before tossing it to him and starting to work at her finger tappings to focus her psychic powers on locking down some of the now coming bad guys. Unfortunately, as her powers flare, they react badly with the mirror magic and suddenly a sort of weird colorless non-existence starts crawling out from the mirror to gather them all in.

Now armed with a gun, Kasper engages the enemy assassins and manages to keep them held off  long enough for the two youngsters to contain the warping magic and for Daley to recover her senses. The effect at least fails to swallow any more bystanders and only Kasper, Daley, their charges, and the assassins are stuck in the warped space.

The space has become a vague colorless, glass realm of oddly warped gravity with twists and turns that don't visibly move but two people taking the same turns might still find themselves separated. Reflections mix with translucent see-through walls and places where the gravity pulls one to the walls or the ceilings. The shape of the mini realm seems to be vaguely spherical in nature but overall it is impossible to tell for sure. He yells at the clerk to get the pranksters organized and do something to fix this while he and Daley try to hold off the assassins.

"Don't just sit on your ass, Daley, do something."

"Charming as ever sir," Daley notes as she starts to recover from the feedback of the magic intersecting with her psychic abilities.

Lt Daley worked with her abilities to confuse two of the assassins causing them to shoot at each other. One is shot in the shoulder while the other has bullet slam into his leg. The blood flows from the wounded killers into the colorless and translucent walls. It seems to multiply itself and spread endless lines through out the structure of the place adding threads of liquid red dripping and crawling in various places around the bizarre space.

Kasper tries to work out a way to get closer to the two pranksters and ends up turning a corner just as one of the assassins comes around the other direction. Both are surprised, but Kasper reacts a little bit slower, getting shot firmly in the corner and sending him sliding off the edge. A last chance to grab at the edge is lost and he finds himself slipping into a position where he feels like he is moving and accelerating but where there are no visible signs of his position changing related to anything else.

Using the gun he borrowed from Daley, he fires at an enemy trying to flank Daley, using that to add a bit of different momentum to his stagnant fall and give himself an actual change in position. He rockets across, suddenly seeming to go from no motion to incredible velocity in a blink as he slams into the man that originally shot him. The assassin breaks his fall, but is killed when he is slammed into a wall (or ceiling or floor or whatever) with Kasper landing on him at near terminal velocity.

This gave the kids time to, not exactly correct the problem, but at least open away out. Agent Sierzant, Daley, Jintoishi, the Schemer, and the Plotter all are pulled out through the still unstained reflections and appear in an underground room which Kasper takes to be the ceremonial room Jintoishi had mentioned earlier. They've come back into contact with Violet and Campbell to confirm everybody's safety before taking some time to look about the room.

Kasper notes that despite the fact that Suidobashi knows about this place, they haven't pillaged it or manned it but simply tried to bar people from it. He quickly confirms with the college kids and the city planner that this is the room he was thinking it was and asks them to confirm whether their power came from the room or if it just taught them. They note that they just learned how to do stuff and point out some scrolls, some of which they could read.

Immediately, Sierzant turns to look at the scrolls. Between the language charms they carry and Sierzant's own skill with ciphers and the like, he manages to parse the archaic Japanese to note that this place and most of the scrolls are even older than Katkemat's time. The entire room is set up as a sort of massively powerful scrying platform intended to be used to keep an eye on an entity from beyond this multiverse. An entity which seeks to devour universes into itself.

With some deft maneuvering driven by Kasper, the site comes firmly under M-Com control.
at March 11, 2017