I am planning to run some online scenarios for the Divine Blood game on April 28th/29th as part of International Tabletop Day. I plan for the event to go on my youtube channel afterwards as part of the ITTD sharing.

I am going to test out some livestreaming options but, if those don't work I plan to do it through Google+ Hangouts, use Fraps to record the session and then post it later.

This is a link to a Time/Date Planner. And below is a screenshot with the times I am planning on running. I plan 4 hours (the graphic blocks out start and end time and thus looks like 5 hours) run time but could go long if necessary and everybody is having fun. 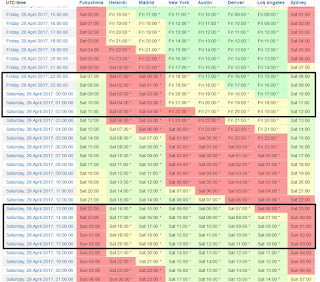 The scenarios in question could be any of the following dependent on what people are interested in:

Day at the Fair - Intended to be comedy/slice-of-life, set in a high school fund raising fair. Intrusive reporters, annoying classmates, and supernatural puberty issues. It's the scenario I've run the most often and is for sale on my drivethrurpg page.

Don't Let the Sun Go Down - More action oriented. Amaterasu was on her way to her middle school in Seattle when a powerful storm and earthquake came over the city and now she's missing. Everyone moves to find her.

Chasing Tails - Investigative storyline. The characters are a group that investigates the occult and may have potential themselves but are not part of any of the communities. Nearby, a town is being terrorized by sightings of some sort of supernatural animal and they've decided to look into it.

Alternately, I could improvise a scenario such as on a luxury air-ship (zeppelin) or civilian low-earth orbital craft. Both of which are things that are in the setting but haven't yet appeared in either fiction or game. So, yeah, we could very much do murder on a zeppelin.

Divine Blood RPG has a more involved char gen than most Fate-based games, so I might run these via Fate Core or Fate Accelerated for quick char gen. Alternately, if we're fine stretching time, we can do some char gen to get the basics done and fill in the rest along the way. Day at the Fair also has 24 pre-gens which double as NPCs. Also, we can do char gen in discussion here leading up to the day as well.


Please contact me at Thrythlind@gmail.com or in comments here if you are interested.
If I fail to get livestreaming working, I'll post a google event for it.
at April 20, 2017