Many More Visitors - The Journal of Aisha Yethtai 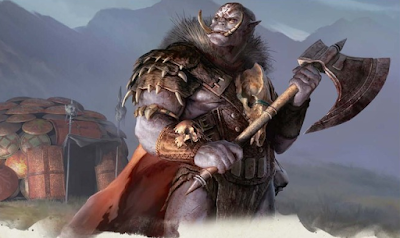 Our intentions to seek out the villagers who had fled the keep have been delayed by the events of this day, unfortunately. The fact that they have not returned from their refuge concerns me a fair amount. It has been at least two days and none of the residents of the village have made the least effort to return and see what the current status of things is. We had taken refuge ourselves in the battered ruins of the central keep when, upon the rise of the new day, we found that there was a mounted company within the walls of the bailey portion of the settlement.


These warriors were mounted upon horses, which made them quite a bit more respectable than the worg riders we had dealt with previously. It soon turned out, however, that these were Zhentish Mercenaries seeking to lay claim to the town. There was some minor disagreement on this point and it appeared as if things might require a drastic solution. However, I was eventually capable of suggesting that they would not want to risk the ire of the Lord's Alliance, a prime employer, by trying to lay claim to something just outside Waterdeep's doorstep.

More than likely, the Zhents will end up in control. I do believe that Nightstone was established specifically so that certain Waterdhavian nobles might have a place outside the accepted jurisdiction of Waterdeep where they might do as they please. However, I was not willing to acquiese to anything more than suggesting that we, the warriors on the ground, had bigger problems to deal with and that the matter of who could claim it would be one for individuals of higher authority than us.

I am well aware of the reputation of the Zhentarim, especially given my recent time in the Heartlands where memories of the old Black Network remain rather fresh. However, I found these sorts quite reasonable and unlikely the fanatical worshippers of Bane that they used to be known as. Perhaps this is a sign of a recent change in the nature of the organization, or perhaps the old tales simply exaggerated their cruelty. I do not know for certain. What I do know is that our agreement came in a timely manner.

It wasn't much longer after resolving the issue with the Zhents that we heard a sound I am woefully and intimately familiar with. A warband of orcs had worked their way south and decided to take this opportunity to raid the fortress. I imagine that this is some fragment of the Many-Arrows horde that splintered off and worked its way through the lands further and further south. I can tell you that there is nothing quite like recognizing the sound of orcs praising Old One Eye to stir the demonic blood to a bit of excitement.

This is partially where the matter of the builders' lack of understanding comes in. The town and keep are upon an island out in the middle of the river, which is a good placement, admittedly, but there is no platform to walk along the walls. There are a handful of guard towers arranged along the expanse of the wall, but that is the extent of it. This leaves large portions of the wall indefensible. I suppose they assumed that the river, steeply sloped banks and the palisade itself would be enough of a deterrant so that it was unnecessary to have an open line of fire on every portion of the wall.

Then again, the extent of their strategic preparation might have been "make it look sort of like a castle" for all the actual evidence I have of anything like practical consideration of defenses.

I would also note that I doubt they had enough of a garrison for the size of the settlement they had. The keep most certainly couldn't hold enough men, especially given how much of the keep is given over toward expansive bed quarters and feast halls. I suppose it is conceivable that the residents of the town might be called upon as a reserve, but I imagine that one of the first improvements that might be made is to add a proper barracks.

Alongside the Zhents, we engaged in a defense of this woefully prepared town. Filia supported the northeast side of the battle along with the Zhentish captain while Tarnish and I attempted to keep the northwestern contingent of orcs under control. Gwenfys had started off near the drawbridge and ended up supporting us to an extent. Stor remained in the keep to protect the nobles there.

The battle was quite touch and go for a bit. The warlock was able to use her magics to help the Zhent soldiers keep control of their side of the battle but on our side we had an issue involving an orcish priest or shaman of some kind. As I have said, Tarnish has shown a modicum of tactical ingenuity and sense and managed to force the priest to keep his head down, but the bulk of the orc warriors pushed on.

For a brief moment it looked as though we might be overwhelmed as orcs began to successfully climb over the walls. Tarnish herself was laid low while I sought to cut off the orcs that had reached the courtyard before they could assault the warlock from behind. Gwenfys fortunately had managed to reposition herself at this point and remove the immediate danger from around the silver dragonbron's unconscious form. We were then able to clear our side of the danger before heading to support Filia and the Zhentish captain in their battle against the war band's chief. The warlock had it quite under control, however, and our help ended up not being terribly needed.

This has necessitated the aforementioned delay, however. Tarnish especially needs the time to recover her endurance and magical energies. This I can accept, though I rather wish she's stop trying to rate the service of the keep. It seems that be that her greatest concern in this whole matter is how it has affected her traveling holiday and seems to come with an attitude that the entirety of this assault was manufactured simply to annoy her.