The Trip to Carnath Roadhouse - The Journal of Aisha Yethtai 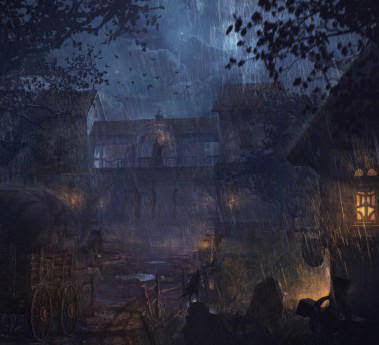 We now have a legitimate task before us. I suppose the eclectic nature of our group is such that we do match the accepted definition of a band of roving adventuerers at this point. In any case, we have decided to make the trip along the coastline in the shadow of the Sword Mountains to deliver this shipment of weapons. Neither Waterdeep nor anyone else is aware of any reason why such a shipment should be a matter for concern and thus there was nothing preventing us from delivering this merchant his goods as we had originally planned. The passage to doing such proved to be a little bit more problematic than we originally expected however.

Our thoughts were focused on the rather general danger of giants and their activites as we traveled northward. A consideration for the coastline brought the possibility of pirates or sahuagin raids. Not that there the current situation had shown either to be especially active. In fact, I had recently heard that several prominent pirates had mysteriously moved roots from the sea inland to become river pirates on the Dessarin River. Supposedly it had something to do with a cult of some sort. Regardless, with our minds on these dangers, we were not quite prepared for what did come upon us.

I had heard of crag cats, of course. They're one of a set of dangerous creatures commonly assumed to be the renegade creation of some wizard or another. They look rather like great fluffy lynxes the size of a tiger or lion, but their size is only a part of the danger they represent. The creatures have an innate resilience to magic and, worse than that, seem to favor the taste of humanoid prey. In this case we had become the target of a mated pair who had intended to teach their kits how to hunt.

When the attack came, I had not been on guard rotation and thus was only within the leather tunic to which the breastplate was meant to be attached. While this left me rather more free to move than my breastplate typically did, it was an overall loss of protection. The shield was easy to pick up and somewhat mollified my vulnerable state.

However, I was not the immediate focus of these beasts. They seemed to be drawn first toward Gwenfys and thus kept her from being able to put her longbow to proper use. I attempted to draw them off her with a few quick snaps of the whip and was at least partially successful. One of the beasts pounced upon me and then I managed to experience the extent of their magical resilience first hand. As a typical tiefling, it is within my capabilities to unleash a gout of eldritch flame upon an individual who has seen fit to draw my blood. When I attempted to do so, the flames washed off the cat's hide and instead passed back over me. This was particularly painful once one takes into account that my particular heritage does not grant me the normal resilience to heat other tieflings have (I instead inherited the resilience to ice and frost drew from his draconic heritage.)

Beyond the reflection my blood-magic, the cats had a talent for bringing down opponents and in the first few moments of the exchange I found myself upon my back. Fortunately, I have some training in returning to my feet and the whip itself has a significant amount of length to it so the situation was only minimally problematic.

While Gwenfys and I were holding off our attackers, there were crag cats harassing the horses. These were mostly the young ones, and gave Tarnish and Filia quite the trouble. Eventually, the two mages began to gain the advantage and the younger cats attempted to flee as they recognized that their pride was being destroyed. Tarnish seemed intent on chasing the animals until she had brought them down. Something about the attack and their resilience to magic had bothered her I think. She appeared to be taking the whole thing rather personally.

Not that I can talk. I have spent too much of my life already being harassed by the jaws of four-legged beasts just intelligent enough to be able to enjoy the pain they cause others. These were certainly not dogs or wolves or any other sort of canine, but I didn't particularly feel like letting them flee into the wild where they might grow up to menace these road ways again.

Afterwards Gwenfys skinned the bodies at the request of Tarnish. Apparently the silver sorceress has plans for the beasts' fur. I suspect the plan is to craft some form of enchanted cloak as she requested that we find a tanner when we stopped in Thornhold. It didn't take much effort to find such a person, tanners can always be found by the intense stench of their trade, and the cloaks were handed over to him to be dealt with leaving us to stay there for a little bit longer than we had originally intended. Filia took advantage of the time to have some of the gems we'd acquired from our earlier battles. She is planning that we carry the bulk of our resources in the form of gems so that it takes less space to carry a greater amount of resources.

The dwarves of Thornhold are the typical stand-offish lot and they don't appear to be connected to the Dwarven holds of Sundabar or other great dwarven nations. The building and village itself seem to be of older human-make. Sturdy, certainly, but not quite the work of art of most Dwarves.  They kept to their own affairs, left us to ours and fairly soon we were back on the road heading north. Fortunately the remaining travel had no event of note and we came to Carnath quickly enough. The merchant was a bit suspicious at first, but Filia managed to help garner us a tidy amount of remuneration in return for doing them the favor of bringing the weapons.

The next leg of the journey is coming. We are planning to cut across the wilds in order to reach the Kheldel path and head northward to Triboar to deliver our message. Hopefully this trip through the hills will be somewhat less eventful than the last.