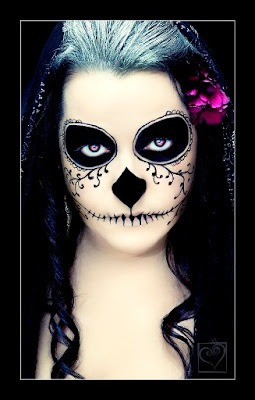 Rosa wears death in radiance and glory, I wanted to say it was in spite of the nature of death, but now I am not so sure. She is not ignorantly wrapping in the shallow glamour of it the way a goth does. No, she has too much influence over it to be so simple. She knows about what she is wearing, more so than most. I would not be surprised to learn that it was more than what I knew about death myself.

Item 1: Death-Touched: Rosa is occasionally touched by death.
Item 1a: Rosa can see the Auditor.
Item 1b: Rosa does not appear as a Sin-Eater the way Thordis sometimes does.
Item 1c: Was able to see the last moment's of Edna's life.
Actions to be Taken: Ascertain the nature of Rosa's connection to death.

Item 2: Rosa's House: Rosa's house is steeped in death.
Actions to be Taken: Ascertain whether there are ghosts present. Ascertain the presence of an Avernian Gate.

Item 3: High Speech: There seems to be some connection between Erica Blackburn and Rosa Calvaria.
Item 3a: Both speak of a "High Speech" as if it is connected to their powers.
Actions to be Taken: Learn what the High Speech is.

Item 5: Powers: Has demonstrated powers other than those related to death.
Item 5a: Was able to tell that there was something false about the paintings.
Actions to be Taken: Be cautious of truths and falsehoods in her presence.

Item 6: Mage: Identified via induction.
Item 6a: Is of the same kind as Erica.
Item 6b: The conclusions leading to Erica being identified as a mage carry over.
Actions to be Taken: Investigate the nature of a mage.