News of other Battles - Princes of the Apocaverse - Session Twenty-Seven 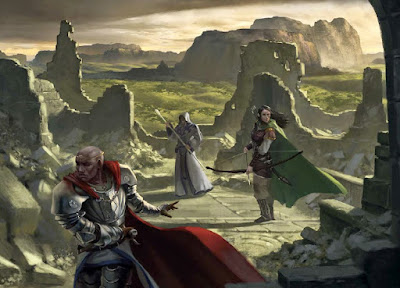 The Flame's wick guttering out;
With only a lingering ember below;
The heroes recovered from the bout;
And stood in the lava's glow.

The former prisoner of fire's wrath;
Was cleansed of lycanthropic curse;
Mystra's power taking a simple path;
Through Elivia's faith it did traverse;

Upon Gariena's shivering shoulder;
Set the tiny form of Lohn of 271;
To comfort her with fire's smoulder;
And a battle will and truly won.

Bet they could not easily rest just yet;
As the other cults were still moving;
Still growing their bloody and violent debt;
With reports quickly incoming.

The Moonsilver family reported their own fight;
A crash of vulture riders coming in the night;
From parts unknown to come and alight;
To retake the Spire by sheer might.

Against the pegasi and their own riders;
This force proved to be quiet inferior;
But they came along with many gliders;
And fell in bloody parcels about the exterior.

The Howling Hatred's aim was quite clear;
And they had not yet given up their goal;
Harassing the Spire with little to no fear;
A fanatic's bravery blinded them to the toll.

The assault on water had heavily stalled;
Upon an underground river frought with peril;
Hungering ghouls through the waters sprawled;
And turned on the knights their natures feral.

With several dead and now joining the pack;
The river below had become impassable;
These defenses had become impossible to crack;
And the Crushing Wave's rage was irascible.

The Wave's allies beyond the deep and dark caves;
Were far out to the seas and along the coasts;
And would be slow to reach the Temple's graves;
But the distant pirates were already giving boasts.

Fennle addressed her suboridnates' issue;
Telling them to barricade where they stood;
Making these their orders most official;
And keep the region free from nautical hood.

News came to Marle of a chilling note;
In Yartar a small thieves' guild holding auction;
Of a powerful arcane weapon worthy of gloat;
Something of elemental concoction.

How a small group could come by such a thing;
Was not answered by the reports terrible;
But the Harpers were able to twist and wring;
A little more info from this troubling parable.

The Twelve of Triboar had defeated cultists of flame;
And recovered a mysterious box of magical nature;
This vanished and they could find none to blame;
Until one Nareen Dhest called a auction to cater.

But worst of all the knows coming to their ears;
The Enclave brought tale of a quaking of the earth;
Blasting Beliard and striking alight many fears;
There was escape from harm in not one hearth.

Defenses were shattered and homes crushed;
The Enclave was scrambling to fortify it again;
As the Iceshield Orcs felt pressure released;
The rampaging hordes struck where forces were thin.

And the Black Earth remained free to strike;
Not pressed in their home as were the others;
Untouched by the war's eager spike;
And comfortable watching their peers smother.

Within their own reach the heroes found more;
A colony of brown mold fed by great heat;
Brooms of flying and quivers of abberant bore;
A fiendish want of electrical beat.

But most stand out of all was the flint dagger;
Born by Vanifer before her fall to monastic shrike;
Possesed of a heat which would most stagger;
The cursed blade of Eternal Flame: Tinderstrike.

Elivia ascertained the presence of a fragment of evil;
And instructed all not to touch it with warnings dire;
A container to hold this agent of horrible upheaval;
Was called for to seal away the heart dark fire.

Theories abounded about the artifact;
Until the thought that fire was undone by water;
They thought they could undo this evil pact;
By leaving Tinderstrike in an aquatic blotter.

They thought to question this theory then;
And contacted the aarakocra at the Spire;
Asking advice to come with the wind;
Surprised they were with the speed of this wire.

Soon clashing into the forge's domain;
Came a procession of aarakocra and genasi;
With a herald worthy of a great thane;
Who announced the presence of visitor classy.

"The Fifth Clerk of the Third Library;
Of the Fourth Duke's Son: Kirya the Great;"
And behind this extensive title airy;
Came a djinn through the newly opened gate.

Kirya came to congratulate them on their progress;
On behalf of the Wind Dukes;
And noted that the cult was now one prophet less;
He offered advice reward to the troops.

Scrolls of magical nature linked to library wide;
To grant knowledge and skill to the reader;
And the benefit of his own humbly vast pride;
Their questions one and all to quickly answer.

He confirmed that their plan should end the dagger;
And stayed long enough for Marle to entertain;
With a masterful cover of Tubular Bells with swagger;
With yarting and Shandilar's Song in refrain.

With a poor genasi now tasked to learn the piece entire;
And left with a sheath of papers covered in musical note;
A building anxiety for her place in the air-touched choir;
And praying that she would not be smote.

With the leave-taking of the pompous djinn clerk;
The heroes turned their attention to a new riddle;
A deep shaft with a sinister red glow in the murk;
With a rune-engraved stone floating in the middle.

A ceremony to the mastery of Mystra revealed secrets;
That this platform would rise to the command of "ember";
While the word "ash" would send it to the deepness;
A clear conveyance for those who were a cult member.

Discussion was had as to how to address this matter;
Lohn suggested tossing down some of the brown mold;
Fennle suggested destroying the stone in a clatter;
Others suggested placing a guard most bold.

Elivia considered engaging Mystra to call great magics;
A wall of shimmering colors heard tell of in ancient days;
To seal off this passage and shut off the lurking madness;
But the hard to gain and it would not make long stays.

Talindra suggested the shaping of stone to close the hall;
A solid barrier that would stand terribly firm;
To make it easier, stone blocks great and tall;
Where piled high before the prayers made them squirm.

With a block to the wall twenty feet thick;
They turned to the matter of where to move next;
To the south the Howling Hatred were thought to stick;
But to the east the Black cursed and vexed.

Seeking the Wave's portal was the eventual aim;
But the Black Earth had caused much harm;
And the Howling Hatred were gnawing in shame;
So they looked to end the earth cult's charm.

While Lords and monks delivered instructions;
And bards and paladins conferred with peers;
Lohn and Aengus set about to test deductions;
Each taking one of two paths to where it steers.

To the south, Aengus crept close to a locked door;
Like the other doors in this dwarven city;
They rotated around a central axis in the core;
Secured by a simple obstruction in manner witty.

Listening close the assassin easily heard;
A clatter of ogres discussing their task;
Munching on mutton and thick bean curd;
They spoke in giant as they passed the flask.

Unable to decipher what it as they spoke;
Aengus slipped back to bring the news;
Asking if any wanted some trouble to poke;
And challenge the might of ogre thews.

At the same time, Lohn took the north path;
And came to a room of columns and dust;
With a dwarf of stony and silent wrath;
Unmoving and breathing not a gust.

To this statue the invisible pixie could see;
Signs of ponderous steps taken one by one;
Stopping at the stone guard so trusty;
Construct or trap not yet undone.

Relaying this to the others quick as could be;
They considered their options seriously;
Facing five ogres in a problematic spree;
Or the ominous statue and its hands spiky.
at October 29, 2017