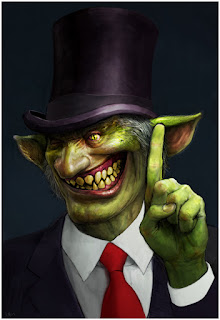 To be perfectly fair, I was on the vigilante side of things for a bit. That's how I got into this whole adventurer, cult-breaker deal in the first place. As a young changeling from a family that hadn't been human for generations, I grew up exposed to the occult and the supernatural quite often. Back home you had the dangers of the occasional fanatic or criminal organizations. The outsiders weren't so much of an issue, I mean, they'd been around and there were the occasional aberrations. That's where things like  dopplegangers came from, after all, and I eventuallly come from dopplegangers, but the first time I stumbled on a cult to them I decided to go the whole superhero deal.

It went predictably, horribly wrong. We eventually cleaned the mess up, but our attempts to fix things at the start made everything so much worse and there was so much more collateral damage than there needed to be. After the fact, Department 7 cornered us and we got the offer to stand down or join up. I joined up, and then a year later, I was Lost and who knows how many years later I was playing Sentinels of the Multiverse with a demigod and a tiger-man. The Wraith, Expatriette, and Chrono-Ranger versus Miss Information in Rook City.

The tower had gotten larger, it now had six stories with a bundle of new facilities. Magic is just the most efficient of building methods it seems. Istryx had told us that Jakk had been set to another task. Kelmar was reasonably annoyed at this, but the demigod was about as forthcoming as ever with details, meaning that there weren't any at all.

After a little bit of a rest following the fight with the Abolist, we returned to Opali and bid farewell to Astra as her contract with us was up and she wasn't particularly interested in carrying too far forward from this point. At least not right now, I still want to keep aware of her in case we have need of her skills again.

Bringing our kobold investigator friend back to Calliopeela, we reported our findings to the government office and then looked in on the Arbor Master only to find that he and his wife had been murdered. A kid nearby said he'd seen a goblin in a cape and a top-hat sneak into the house as if through a shadow and then take off running after sounds of a confrontation. Looking into the Ritual Master's house, we found a diary that proved she had knowledge about the fraudulent nature of the ritual they were using so now she's looking at some trouble. This also gave us the name of the company behind the loggers.

This took us to a train up to a new country on this peninsula, one that was quite a bit less regimented than the one we had been in. That company was Greenbottle, Argentaumn, and Peppertale Incorporated. A group founded by a family of goblins selling pepper and later acquired ellyon and gnome partners. The current board's representative of the Peppertale family was quite young and recently come to power after the death of their father.

The interesting thing about this was that our top-hat wearing assassin turned out to have a reputation. There had been four other victims besides the Arbor Master. There had been a journalist doing a piece on the GAP by the name of Mardnan Raulnor, a court clerk by the name of Xahndyg Yellow-Goat, Eldon Nackle a bureaucrat, and, killed just before we arrived in town, a GAP shipping foreman named Uke Foamhold.

Our killer is being called "Haberdashing" and referred to as a serial killer. We have a few ideas about what's going on. Kelmar favors the idea that they're dealing with a cleaning up operation. For my mind, it might very well be a vigilante. To be honest, the only real difference to us is that a vigilante means a dead end and an assassin means we might actually have some information out of him. Again, I favor the explanation of a vigilante because that would be the most annoying result and best to prepare for the worst.