Rebuilding for the 5th Edition: Teryna

Okay, this is probably one of the most mechanically easy characters I'll be doing.  Mechanically speaking, Teryna is a human rogue.  It's her backstory that's a bit weird. 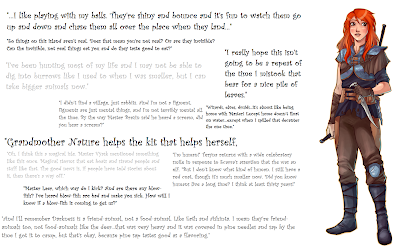 Now, unique among my characters so far, I actually HAVE stats for Teryna in an easy to find place (I expect I can find the other characters' stats if I look hard enough, for that matter.

In 3e her stats are:

Given that she's human, that Dexterity is impossibly high by the standard rules.  Using the 30 point buy method that I have been using, I get this:

If I wanted to, I could switch around Strength and Charisma, because Teryna's lack of understanding of people made her come across poorly several times, but I love the image of her struggling with her axe.

Anyway, I only ever got Teryna to 2nd level before that game dropped any sort of rules and became just freeform, so I'll make her as a 2nd level character.

For Favored Enemy, I'll choose Beasts, this being because she primarily hunts them for food.
For Natural Explorer, I'll go with Forest
For Fighting Style, she'll go with Defense, she mostly just fought to avoid being hit.
For her ranger spells, she'll take Jump and Longstrider....hyperactive little thing she was.

She didn't get third level, so she doesn't get an archetype, but it would be hunter.

For her proficiencies, she gets:

For her human skill, she'll get Acrobatics
For her feat, she'll get Athlete (and increase her Dex by +1, hmm, not that impossible after all to get 17)

Now, for her background.

This is where it gets weird.

Teryna is a reincarnated wizard's familiar.  This backstory doesn't work so much given the way familiars work in this setting, but in the story, she was a fox magically bonded to a wizard through a familiar spell...an assassin tried to kill her master and she got in the way to protect him, losing her life.  The wizard, after frying the assassin, begged a druid friend to resurrect the fox...and suddenly Teryna wasn't a fox anymore.

Now, as a a former wizard's familiar, I'll give her two skills: Arcana and Perception.  Since keeping alert was a job of a familiar and she was around to witness a lot of magic.  For her two tools, she goes with Leatherworker Tools and Cook's utensils, more because she immediately went about learning how to make herself "some new hides" and cooking...because she loved cooking.

For a feature, she has a unique perspective that gives her insight into the behaviors of those of magical ability. 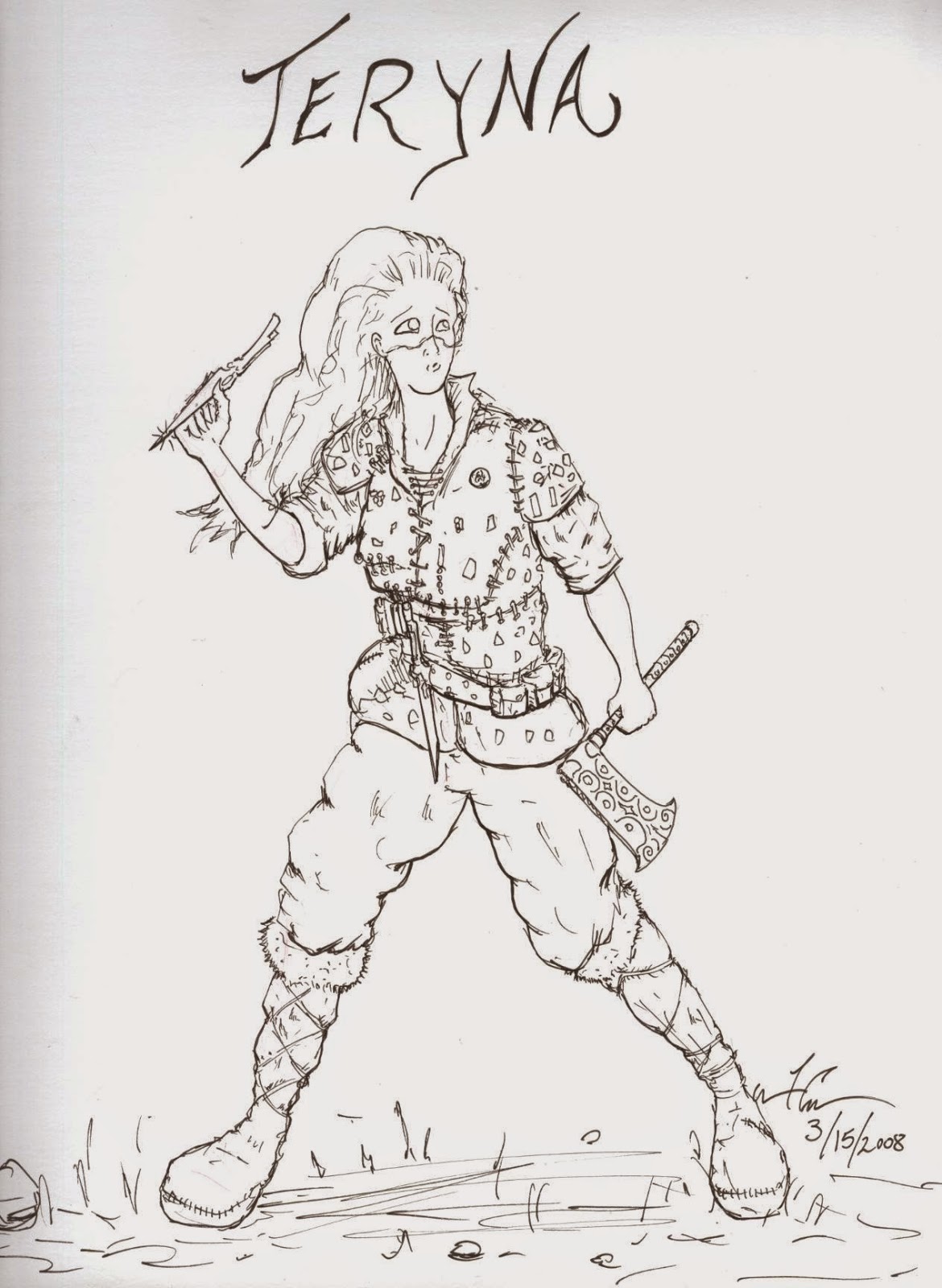 So, here are Teryna's stats:


On looking for friends:

"Any sign of anybody not wanting to eat us?"

""Hey! Mistress Saeth!" Teryna calls out as she takes in the woman's form and recognizes her. "And Master Delmo, you're both alive! We're alive too. "

"We have a camp over there and jumping across the trees would be fun again. A lot more fun than being food anyway."

"Maybe Big-Sister just wants to play with the ball?" Teryna said. "I know I like playing with my balls. They're shiny and bounce and it's fun to watch them go up and down and chase them all over the place when they land...(remembers being taught juggling)...But catching them before the fall is fun too."

"Rabbit would tas...no, that's not a food rabbit. That's a wizard rabbit. Ahhhh...maybe the sailors have chicken...chicken is good."

"Hello, Ashinta," Teryna said cheerfully, cocking her head just slightly. She was still considering this wolf as it seemed to be a bit strange in ways. "I'm guessing you're a friend-wolf not a food-wolf or an eating-wolf..."

"And hello Erth," she waves at the bird and then looks back over her shoulder at the wolf. "Erth is a friend-bird, not a food-bird."

"And I'll remember Darkness is a friend-animal, not a food-animal. Like Erth and Ashinta. I mean they're friend-animals too, not food-animals like the deer...that was very heavy and it was covered in pine needles and sap by the time I got it to camp, but that's okay, because pine sap tastes good as a flavoring."

"The plant tried to eat Master Brash," she pointed at the nasty vines "and there's a big wolf behind you. But I don't eat people, so you and Master Brash are both safe."

"Okay, let's finish eating and then bury Master Waymill. Then you'll show me where the water is so I can get a nice bath...do you have soap? Soap is nice, especially when it's not getting mucked up in your hair....anyway, bath and then find a good den."


On her home life:

"Wizards, elves, druids...it's almost like being home with Master! Except home doesn't float on water...except when I spilled that decanter the one time."

I wonder if he's (Master Vyask) found out I left yet (months ago)...Did I finish the soup before I left? Let's see, I started the fire...I set the water to boil...I put the ingredients in...I realized that the merchant caravan was going to be passing by soon...Oh...hmm...oops....wait, wait, that's for later...deal with lack of manners-type here.

"I really hope this isn't going to be a repeat of the time I mistook that bear for a nice pile of leaves."

"Was it a bear? Bears are very irritable, they don't like being used as a bed for one"

"I slept in a tree," Teryna declared. "Did you know I didn't used to be able to climb, my toes weren't long and bendy enough back then...wait, fingers, right I mean fingers."

"Master used to have me do this all the time when I was little," Teryna explained. "Most traps are for people taller than I used to be...so if I set something off it would usually miss me. At worst I usually just singed my tail or something."

"Oh don't worry about it," Teryna said waving her hand dismissively. "My Master is a bit clumsy and I'm sure he'd suffer a lot more than a singe if I didn't help him....hmm...maybe I should have stayed with him...I wonder if the new helper is working out well...."

"That's silly," Teryna said. "She's a wolf! Doesn't she look like a wolf? Aren't you a halfling? Not all of us look like something we're not."

"I'm good," Teryna said. "I've been hunting most of my life and I may not be able to dig into burrows like I used to when I was smaller, but I can take bigger animals now."

"Umm, I'm not hunting people for food," Teryna said. "You get in trouble for just biting people, even if they step on you. Which really hurts a lot. So I don't hurt people unless they're really trying to hurt me and not just accidentally step wrong or drop things or something."

"Well, I don't have my hammock," she said, referring to her silk rope and the canvas she'd padded it with after the elf-woman had tied it for her. "But I think I left that on ship. And I ran out of ink, but that's because I poured it out to have something to hold the rabbit blood in if we didn't find water because I didn't want to ruin my waterskin."


On Fire and Pine Forests:

"Don't mind Master Brazin, Master Brash, he accused me of killing someone too."

"Oh, this is Master Brazin!" she said. "But he already said that. He talks about elves a lot."

Maybe when there are ten or more of us we can start thinking about punishing people for talking about stuff. At least, that's what Master Vyask said was what you needed to start civilization...Let's see, 1 to cook, 1 to clean, 1 to make clothes, 1 to push people around, 1 to tell people what to do, 1 to complain about everything, 1 to tell everybody to calm down, 1 to have trouble making decisions, 1 to take credit for everything and 1 to kick out. Yep, 10 people for civilization,"

"Grandmother Nature helps the kit that helps herself, Mistress Saeth," Teryna said diving ahead with a bit of spring to her step.

"Masters and Mistresses, Mistress Saeth says that the storm is not right, the wind is clumsy and stuff. And my Master Vyask told me of terrible storms that come every generation and eat everything. I don't want to be eaten!"

"Oh, I think this a magical isle. Master Vyask mentioned something like this once. Magical storms that eat boats and strand people and stuff like that. The good news is, if people have told stories about it, then there's a way off."

"Belly?!" Teryna shouts excitedly. "I don't want to be in any belly. You can't come back from being eaten! Which way do we go? Where's the throat? How'd we get in a belly? I don't remember teeth!"

"I've never seen an elf like you," she noted with a curious tone of voice. "I have family with black coats too, only people call them silver for some reason, maybe because of the white patches. Would that make you a silver elf?"

"I'm human!" Teryna returns with a wide celebratory smile in response to Scarra's assertion that she was an elf. "But I don't know what kind of human. I still have a red coat, though it's much smaller now. Did you know humans live a long time? I think at least thirty years!"

"Corn chips? I don't really like corn chips, they used to make my stomach hurt when I was smaller."


On light in the dark:

"Oh!" Teryna said at the half-orcs comment. "Yeah, light, that might be why I can't see you very well. Hard to get used to that."

"I didn't find a village, just rabbits. And I'm not a figment, figments are just mental things, and I'm not terribly mental all the time. By the way Master Brazin said he heard a scream, did you hear a scream?"

"Pleased to meet you," she said cheerfully. "So things on this island aren't real. Does that mean you're not real? Or are they invisible? Can the invisible, not real things eat you and do they taste good to eat?"

"We never saw the halflings," Teryna said, rocking back on her heels. "There was some sort of scream, then we found Brash, and he talked about halflings that he wasn't sure were real or not...something about the island taking things...and then a vine tried to eat him."


On sinking ships and being adrift:

"What if the water ruins all my chalk!"

"Master Laer, which way do I kick? And are there any blow-fish? I've heard blow-fish are bad and make you sick. How will I know if a blow-fish is coming to get us?"


On failing a survival check:

"Hey," Teryna calls out. "There's food on this island." To herself she adds a bit quietly. "Or there was a week ago at least."


On the behavior of plants:

"I'm here," Teryna called out apparently having followed Brash along the other side of the bank. "Did that tree try to eat you too? Is there something about you that vegetables find tasty? I didn't often eat vegetables, made my stomach hurt. Grass is good for a stomach ache though...weird. Anyway, I think Ashinta and Master Brazin are up this way."
at September 05, 2014