Another rebuild.  This one is going to be a little difficult because her race doesn't actually exist as a player race: wererat.


So to start, I'm going to build a "wererat" race.  It won't have resistance to normal weaponry or anything and will tend more towards the mechanics of the hengeyokai race that I based her stats on mechanically in 3.X.


Wererat Traits:
Ability Score Increases: Your Dexterity and Constitution scores go up by 1.
Age: Usually as per human.
Alignment: Natural Born can be any, but will tend toward the environment they were raised in.  Infected are Chaotic Evil due to the curse warping their personalities.
Size: Normally as human.
Speed: 30 feet
Darkvision: 60ft
Rat-Shape: You can take either the form of a normal rat or a rat-person.

The change to rat is as per Druid Wild Shape rules.

While in the form of a rat-person, you gain +1 Dexterity and +1 AC and have a natural attack of a 1d6 bite.  The appearance of the rat-person can be more or less human depending on the individual.

A wererat can change a number of times equal to their Proficiency bonus.  They remain in the new form until they revert back.  This means they can get stuck as a rat or rat-person if not careful.

A wererat can undo any unwilling tranformation by using a Rat-Shape use.

Carrier: Wererats are immune to the worst ravages of natural diseases, but they can still carry such diseases and be a danger to others.  They are not protected from magical diseases.

Paranoia: Wererats are proficient in Stealth and Perception.

Not sure where this sits on the balance scale, but it is at least not too powerful and may be underpowered.  So now on to the rest of Jhessail's stats.

In the 3.5 campaign she played in, Jhessail reached a 5th Paladin/5th Rogue level, so we'll go with that.

The Dex and Con went up due to the wererat stats, and the Dex in parentheses is for rat-girl form.

We'll start with Rogue since that was what most people believed her to be.

Rogue at basic gives her Proficiencies in the following equipment:

And I give her the following skills: Acrobatics, Athletics, Deception, Investigation

For class features, a 5th rogue gets:

Expertise - I pick Investigate and Deception, she never lied, but she used her Paladin and Wererat abilities so subtly that no one ever considered that she was anything but a human rogue.
Sneak Attack (3d6)
Thieves Cant
Cunning Action
Uncanny Dodge

She also has to pick a roguish archetype.  Since she's trained as an undead hunter, I pick Assassin.  However, the bonus proficiency of poisoner's kit doesn't fit that, so I'll trade it out for something else.  I'll call it a consecrator's kit and consider sort of like an alchemist but for creating holy water and such.

Finally, she needs an Ability Score Improvement, I add it to Wisdom because, again, she's hunting undead.  Needs that Willpower.

She also gets Assassinate.

As to 5th Paladin.

She gets the following proficiencies from multiclassing: Medium Armor, Shields, Martial Weapons

For class features she gets:

For her Oath, she takes Vengeance, she is geared toward eliminating the undead in Kelemvor's name, after all.

For the Ability Score Improvement she instead takes the Feat Dual Wielder. She tended to use either paired maces (for bony skeletons) or handaxes (to dismember ghouls and zombies) .

For her background, she is most defined by her youthful religious experience and upbringing in a Kelemvorite monastery, so: Acolyte.

Her clan accidentally unleashed a bunch of shadows in the catacombs and fought a losing war with them that spilled into the streets above, Kelemvorites came down to clean it up.  One of them happened to see her attempt to imitate a cleric turning an undead and was amazed to see a flash of divine energy in the vague shape of a panther rebuke the shadow approaching the rat-girl.  The clerics took her in due to taking the image as a sign.  Since her family had already partially trained her, even by the young age of 8, in thieving skills, they decided to train her as a subtle investigator and hunter of undead things.

The red and purplish blotches on her hair/fur and skin are scars from where the shadows touched her as a child.

For personality, she appeared to be very laid-back and undisciplined to people around her.  She kept a very tight rein on herself, however.  Her eventually goal was to establish a clan of wererats in service to Kelemvor, but wanted to find a way to destroy the curse carried by natural born wererats so that she could establish such a clan without risking it turning into a bunch of insane infected wererats.

Because the effect of multi-classing on saves is unclear and because she didn't happen into self-taught multi-classing, she was actually trained in this manner, I'll give her proficiency in Dexterity and Wisdom saves.

Oh, not listing her alignment below since I prefer to ignore alignment overall, but she was LG 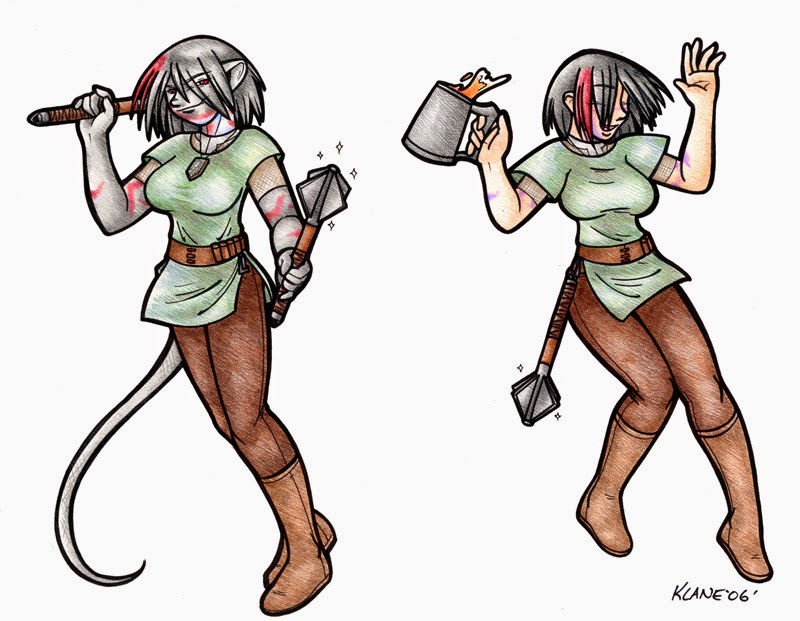