Unsung Destiny is one of the sample campaign settings in the excellent Mutants and Masterminds 2nd edition Mecha and Manga supplement. I will use the book itself to summarize the setting premise:

"In the year 2010, astronomers around the world discovered with horror that a comet had been hiding its route behind the Sun for an unknown number of years, maybe even centuries. The path was charted and discovered to cross Earth’s orbital path.


In the space of a few months, panic and chaos gripped the world as calculations between several specialists conflicted. Some ensured that the comet would crash into our planet, while others presented proof that it would pass by. There were several upheavals that the different governments were hard-pressed to control while planning disaster scenarios. Old religions were tested, and new cults were born and died as their members killed themselves before the promised end of the world.
By the end of the year, Christmas was celebrated with a gigantic new star in the sky. The astronomer that discovered the comet named it “Shiva,” after the Hindu god whose last dance would mark the end of days. Shiva missed the Earth by hundreds of kilometers, which, in astronomical scale, is a hair’s breadth.

Coastal cities suffered from tidal waves, while earthquakes along fault lines created chain earthquakes. Despite the rash of disasters, people confronted them with relief, hope, and happiness, because the alternative could have been much, much worse. Still, the most spectacular gift from Shiva were several weeks of lights in the sky, as ice crystals from its tail melted as they entered Earth’s atmosphere.

The crystal rain showered over several parts of the world, and people also were gifted with shimmering rivers and sparkling forests, until whatever substances the comet’s tail was composed of sank into the ground and became part of the world’s ecology.

A lot of research studied the Shivan substances. It started as a secret, but soon it spread that there were spots all over the world where large crystal formations began to appear, as fungus colonies spread in the rain. Most of these crystals were compounds of Shivan matter with the local minerals it
bonded with when it touched the ground, and they had the novel effect of changing color according to the general mood around them.

The Shivan shards were psychoactive; that is, they reacted to thought, just as quartz reacts to electricity by emitting periodic pulses. Industry did not see much other use in the crystals and abandoned them for any use other than cheap jewelry.

It wasn’t until 2012 that it was revealed that the shards were much more than cheap gemstones. A spelunker found a vein of pure Shivan shards deep in a South American cavern. These shards didn’t bond with local minerals but grew independently. When smugglers beset the solitary explorer as he exited the cave, the fragments he had taken as a keepsake reacted by manifesting an enormous three-headed hound with a strange biomechanical appearance. The hound dispatched the attackers.

The same thing happened in other locations where pure Shivan shards surfaced. Further research concluded that in their pure state, the shards were not only able to resonate with surrounding emotions but synchronize to the unique brain patterns of an individual and create matter responding
to his wishes. The age of the Focusers had come.

The Focusers’ manifestations, be them a beast, a mecha suit, or a weapon, came to be known as “Shivas,” and media and other sources adopted that name. The Shivas are not independent beings or objects. They are the wishes of their Focusers come true, and thus, they are bound together. A Focuser cannot manifest his Shiva without his shard, and the Shiva cannot appear out of the shard without the Focuser’s will.

There is an important distinction to make, however. “Shivas” are the manifestation of the Focusers using their Shivan shards. The “Shivans” are the beings that make it happen. Shivans do not call themselves that, of course, but in truth, they don’t call themselves anything, because they have no need of names.

The Shivans are a race of beings of pure thought, but they need a physical anchor to subsist, mainly crystals. The Shivan comet was a Shivan colony ship suffering a malfunction. They never intended to land on Earth, much less collide with it, since our planet’s psychosphere is toxic to them. They
had no choice, though, and they ejected all the crystal matter in the comet towards Earth, hoping to save as many of their race as they could.

The crystal growths that appeared on the planet are in reality Shivan bunkers and colonies.

Shivans were not aware that the toxic psychosphere of Earth actually was generated by a sentient species, and they learned to recognize individual humans much later. Human thought and Shivan existence are barely compatible, so the Shivan engineers instilled their crystals with the ability to translate human thoughts into a form that Shivans could understand and subsist on. They are not mental leeches, just as humans are not oxygen vampires.

The pure Shivan shards are the main colonies of the psychic aliens, who noted that they were being broken off by greedy or curious humans. This did not affect the Shivans, as they have no true physical existence, but they discovered that people who could become Focusers also empowered the Shivans themselves. So, they inspired the synthesis of artificial shards, which allowed them to expand and subsist and believe they had actually found a new home.

It wasn’t until later that Shivans realized that the human-Shivan interface had an unexpected byproduct: the Shiva manifestations. Shivans were fascinated with this phenomenon, recognizing the untapped psychic potential in humans that could use what was otherwise the psychic refuse of their alien metabolism to create matter.

Humans are completely unaware of the Shivans that power their shards, although some experienced or talented Focusers have had glimpses of the thought race but aren’t equipped with the conceptual tools to understand what they see.

Shivans are completely unaware that they had too much success in creating the interface crystals. Human thought has begun to influence and warp them, and those Shivans who are bonded with a Focuser’s shard are changing, reflecting the subconscious desires of their host.

There are rumors kept under guard by the government and corporations that employ Focusers. These rumors suggest that Focusers can lose control of their shard and let their Shivas wander free, or the Shivas devour the Focuser and become monsters. Following with the Hindu theme started by the astrologer that named the original comet, these monsters are called Asuras, after the antagonistic deities of Hindu myth.

The rumors are true. Sometimes, the psychic interface between a Focuser and the Shivan alien bonded to his shard becomes too strong, and they both become warped beyond recognition. The human goes insane, and the Shivan becomes an Asura.

So far, the Asuras’ existence has been kept from public view, with only a handful of Asura-hunting Focusers knowing about them outside the proper authorities, but it’s only a matter of time before an Asura manifests in a way that cannot be covered up. Then, the society that admired Focusers will
certainly turn against them.

On the Shivans’ plane of existence, the situation is strangely alike. Since the Shivans need the crystals to survive, those few who know of the Asura phenomenon are not divulging it, for the Shivans would panic and try to disengage from the crystals the humans have grown and wear, which would
in turn overcrowd the virgin crystals that remain hidden, endangering all of the Shivans surviving on Earth." - Mecha and Manga; Page 152-154; Green Ronin Publishing

There three common types of Focusers:
There are two rare types of Focusers, almost unheard of:
I'm going to be filling in here with some characters made in various systems. Mostly not Mutants and Masterminds because I like fiddling with systems and I love the idea of this setting.

A lot of the broad concepts of the characters are randomized, but I fill in the details.


Back to Superhero Stuff

Bounded Waves "Ghouls, eating bones." Mythram said quietly as she closed the door again.  "Those are dangerous undead as I r... 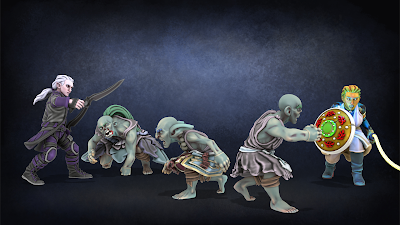