The Bringers' Woe - Princes of the Apocaverse - Session Three 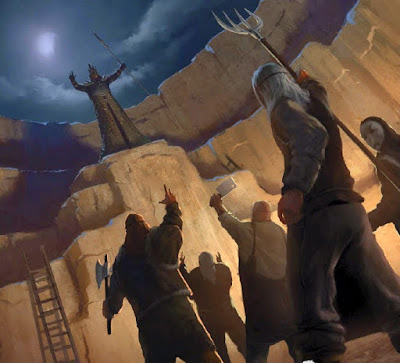 Leaving the necromancer's cave;
To Red Larch the five return;
Seeking rest after facing the knave;
And information to learn.


They reached the town past the sun's peak;
And sought the Swinging Sword;
There the innkeeper's ear to seek;
A tale to regale her with of undead horde.

Shocked and dismayed at the villain's presence;
So nearly a danger to the surrounding country;
But due to the quick end to his malfeasance;
Kaylessa paid them the promised bounty;

Concealed again in human guise;
The tiefling her stomach infernal;
Against a methanol meant to sterilize;
And somehow avoiding wounds internal.

The patrons of the inn watched aghast;
Thick fumes wafting onto the air;
Clouding minds with quite a blast;
As a dwarf carved a small idol to her flare.

Around the back the monk set her tools;
To pare rust from the skeletons' blades;
As she sat around with the mules;
In order to make them into better trades.

The party anticipated a further need;
To transport their exploits' coins
And set their eyes on a wagon and feed;
Seeking the market that the town adjoins.

Talindra was their agent and emissary;
Seeking a used wagon to apply her carpentry;
Rather than head to where Thelorn's crew terry;
And found a halfling to speak to purposefully.

The rustic paladin felt the farmer of good sort;
And overpaid the value of the old cart;
To give in the recent storms at least one port;
She took the wagon back repairs to start.

The cleric took a trip to Mellikho's;
Along with Lohn of Two-Seventy One;
To see what a new plan their harvest sows;
For the late night watchers a tale was spun.

Permission was sought from the jolly owner;
To watch the northern quarry under the night;
While really heading south to Dornen Finestone;
And set a trap and bring the plot to light.

Albaeri laughed off the rumors of the nightly masks;
And suggested they look into Tricklerock;
A echo of the previous tale Dornen had given for tasks;
But gave permission for them to stalk.

That night they took up position to the south;
Tiefling in the air and cleric sounding unintended alarm;
Still the mysterious watchers and a slip of the mouth;
A attempt to abscond by a wrathful fumble takes harm.

Fennel flies fast as a sparrow;
And catches one down to the ground;
Lohn keeps watch with an arrow;
Aiming for a preemptive wound.

Elivia stayed in the cover of the trees;
While the paladin cut off their escape;
And Marle winged down like a hellish breeze;
The cultists hesitated and stood to gape.

One among them declared them Bringers of Woe;
Reached for the scimitar at his waist;
And grew a thorn taken from a cunning foe;
The other fanatics made haste.

Luck turned against the Black Earth;
Already at disadvantage in stratagems;
Three found only an early berth;
Fallen to arrows, rapiers and other damages.

The Cleric of Mystra tried out her new toy;
Bringing tree limbs down upon one's head;
The monk focused on a strangling ploy;
And the last a pair of pommels was fed.

Questioning the maniacs proved little use;
As low level cultists they knew of not;
But dogma and madness and tying a noose;
Yet they proclaimed the name of their lot.

The Black Earth was a cult so far unheard;
Not in the cleric's vast knowledge of many faiths;
Had the name ever in rumors stirred;
But clearly at the center were some elemental wraiths.

Waking up the butcher's husband;
The town's part time constable;
Bringing them to the short battle's land;
They gave over the three beasts to stable.

They spoke yet again of brigands along the road;
And the veteran law man offered a small bounty;
Of ten gold a head to the mercenaries taking the load;
And doing a favor for the not quite county.

When dawn's light finally moved up into sky;
The party finally made to sell the remaining spoils;
Then collapsed into their various beds to lie;
Before tackling bandits and other such foils.