The Reports of Mariah the Blue 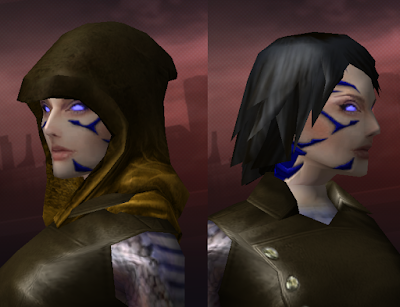 Mariah is one of five women known, to their distaste, as the Daughters of Tiamat. Students, sisters, daughters, and loved ones to a band of adventurers that had thwarted the Cult a number of times in the past, they were kidnapped, dominated, and infused through ritual with the power of the Chromatic dragons. Eventually the mind control crumbled, and the daughters were freed though nothing could part them from the draconic power in their being now. The Green, The Red, and the Black each embarked on their own business while Mariah and Hellenae the White, a wood elf infused with the blood of white dragons, settled down in Athlin. Mariah had previously been apprenticed to a Watch Master and former investigator and gave her magical talents to the Town Watch while Hellenae set about establishing herself as a simple magus.

Despite the large number of languages Mariah speaks, she has never picked up Elvish, something her elven wife, Hellenae teases her about nearly endlessly.

Mariah hopes to find answers to two issues: extending her life so she could match Hellenae's. Finding magic to allow her and her wife to have children.

I'll hold off on doing a pre-campaign journal until I see how things develop.