The Tale of the Fallen One 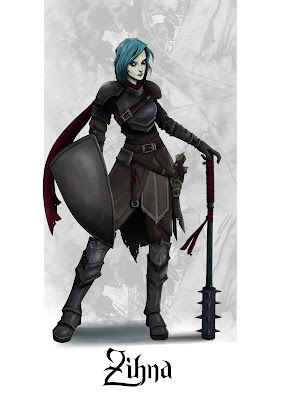 At one time Zihna was not mortal. She was one of the celestial host and was called forth as a part of a battle in which a horrible artifact was destroyed. Unfortunately, in the course of destroying the artifact, her form was inundated with the rancid spiritual filth that poured out of the ruptured item. It stripped her grace away, had she not been celestial then she would have been obliterated outright, but as it stands she was left in human guise. Only a human who bore a terrible and cursed pain and could no longer directly experience pleasant emotions. Instead, she mostly feels rage, shame, disgust, sorrow, and all the rest. Her former compassionate nature has been degraded into one of brutality and rage. A brutality she works hard to keep directed away from those who do not deserve it. At least as much as possible.


The Blighted Branch is Snipped
Beasts on the Path; Merchants in the Tavern