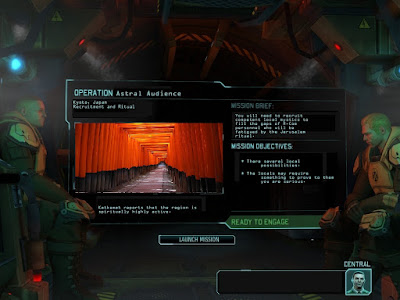 Nearly a month prior to the ritual at Jerusalem, Katkemat, Thomas, and Lt Daley went to Kyoto with the intention of recruiting local mystics to take part in the Kyoto ritual. Upon arrival by train, Thomas was distracted by matching up the lists of suspected and identified mystics with who best fit his destiny, but Daley and Katkemat both felt something was off. Daley felt a growing and simmering anger throughout the area while Katkemat was more specifically able to perceive the altercations of multiple spirits which were spilling over into the physical world in the form of strained moods and unusual accidents. Daley was concerned that the growing anger could eventually send the city into a riot while Katkemat was worried that the spiritual chaos could end up causing a natural disaster of some kind. She especially became aware of the incredibly unseasonable heat that was occuring.

With some effort, Katkemat placed the epicenter of the spiritual disarray at the Fushimi Inari shrine and directed the group there while Thomas remained mostly unaware and simply focused on meeting Miku Hayashi, a young miko whose family attended a small, mostly unknown shrine at the back parts of the mountain where the Fushimi Inari shrine stood.

As they arrived there was some congestion in the foot traffic at the base of the mountain. Apparently there had been some sort of fight. One of the people that had been caught up in it was being treated for minor injuries by a medic outside an ambulance while police were keeping two angry individuals apart and trying to get questions answered. Meanwhile, tourists filtered through the entrance, some rubber-necking to watch what was going on with the belligerents. The stall keepers at the entrance were more than a little put out as the police and ambulance were situated to block most of the stalls at the gate causing them to lose business.

Deciding the situation was just another symptom of the situation, Katkemat and Daley determined not to point it out and Thomas simply felt it was nothing to do with him, so he pressed on to look for this miko who was on the list of preferred recruits. They eventually came to find her after receiving directions toward the back, residential and maintenance parts of the mountain. When they came on site she was complaining to a caretaker that someone had stolen the offering off of her family shrine and he was not so politely dismissing the matter.

Katkemat was noticing that the mountain was curiously bare of spirits for such an active shrine. Barring a handful of irritable guards there seemed to be hardly any. Some of this she expected as Inari and the fox's following would be busy with the rice plantings around the country, but there were other spirits here normally. In fact she remembered her time as a student in the distant past sitting as an assistant to her mentor in negotiating an agreement between Inari and an ancient volcano spirit from the area. As Miss Hayashi continued to speak, with Thomas joining in the conversation, Katkemat realized that it was this volcano spirit's shrine that had been desecrated and that if the matter was not attended to a volcanic eruption was not out of the question.

Thomas and Daley convinced the girl to take them to the shrine under a very steep climb and they found it in a deeply wooded area that was so sheltered by trees that it seemed to be underground even before they reached the rockface. Once Miku Hayashi confirmed that the offerring had been there some days prior and that it would be impossible to recreate the offering in a quick manner as the materials had to be properly grown and raised to be used in the offering.

Daley's empathy led her to a discarded popiscle stick which reminded Thomas of a premonition he'd had involving the smell and taste of vanilla. Daley also picked up the stench of petty greed while the spirits reported to Katkemat a vague image of two individuals coming into the cave to steal the offering. Asking Miku if anybody had shown any interest recently brought up a Mister Kanno who ran an ice cream stand along the main shrine path. They concluded that the man had stolen the offerring with the idea that temperatures would rise and he'd sell more ice cream that way.

They proceeded to the public portions of the mountain and the various shrines there to find the man. Daley confronted him with the Interpol credentials all M-Com agents have. This thoroughly confused the man as he had no idea of anything he had done which would have attracted the attention of Interpol. Meanwhile, Katkemat and Thomas were examining the area and between the two of them traced the spiritual elements of the offerring scattered about the man's stall being used for various mundane purposes. A masterful spellcasting moment later and the offerring was brought back together whole and complete forming magically between Daley and the offending stall vendor as everyone in the area turned to look at him. Katkemat noted several spirits taking note of the action and spinning off to find others.

The ice cream vendor continued to deny the situation, stammering and looking both startled and afraid. As he was apprehended by some caretakers and police were called, Katkemat noted the developing swarm and offered the man the chance to at least absolve himself of some of the spiritual burden by giving him the chance to return the offering himself. However, the man balked, refusing to admit to any wrong doing since he knew that the legal courts couldn't prove anything. Thus he consented to being pulled away by the police and facing the displeasure of all the locals, mortal and spirit.