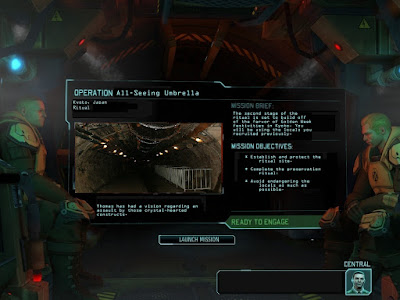 The transportation spell that took the team from Jerusalem to Kyoto also managed to refresh their energy and fatigue and so they began to get right to work. Over the course of the past month, Arachne had purchased one property which they and M-Com had begun to set up as a decoy ritual site. With Carracci's help, they set up a false data trail establishing the warehouse as being used as a temporary command site by Interpol working together with Arachne Bioware. Carracci did warn that the cover would be a bit transparent but that it was well-spun enough that the enemy couldn't simply discard the information. They'd have to check it out. Unfortunately she wasn't able to divert from her coordination with Arachne Bioware in the efforts to tackle Suidobashi Heavy Industries.

Thomas was concerned that there'd be more resistance this time, especially with the vision he received of a unit of upgraded metal constructs. He worked together with the Spooky Girl and the M-Com mystic division to create a sort of "Essence Call Forwarding" situation where the immaterial Spooky Girl could stand in his spot and they could use the fact that she was a Chosen of a foreign reality to funnel his essence into the ritual and leave him able to protect the perimeter still.

The actual ritual site was placed in an old, disused sewer control station approximately under the center of the city, found with help from Kanno Jintoishi. This was secured and reinforced by the Sierzant, with Sergeant Price leading a demolitions and security crew alongside the Arachne Bioware team. After coming into Kyoto with 8 hours to spare and a fresh vision, Thomas reinforced defenses with a series of wards along the tunnels designed to keep out crystalline entities such as the mantids or the Adessi crystals at the heart of the constructs. Katkemat meanwhile was busy with the rituals and working with the locals and those mystics coming in from Jerusalem with them.

That said, Daley and Carracci took some time to set up the decoy site with Takenaka Yuuki and Moto Hinata, the Plotter and the Schemer, to create escape hatches for the decoy guards to fall back to. This presented an interesting show of trust to the arachne as well, since it would take them directly into the underground Tokyo headquarters with the multiversal watchtower that they had only recently discovered and taken over.

As the ritual started, Carracci kept watch on the situation from the Tokyo facility and cursed under her breath as she realized that they had overlooked the Water and Power Station in Kyoto. Kasper was meanwhile nowhere to be seen, but he was in communication with both the Tokyo base and the ritual sites in Kyoto. This was becoming par for the course as he consistently held his cards closer to his chest. Thomas and Katkemat meanwhile focused on the ritual and though the start was a little bit rocky, with Katkemat having to herd several mystics into one ritual. However, Thomas from his unique position was able to blend the energies of the ritual into the ley lines so as to better camouflage the facility.

Meanwhile, the Adessi constructs appeared and assaulted the decoy site though injuries were minimal as the guards successfully fell back. As Carracci predicted, the trick wasn't transparent enough to be more than a delay, but one of the constructs was destroyed before they fell back.

As the ritual progressed, Carracci began to feel the extent of her efforts so far. A fatigue migraine began to creep over her and make it harder to focus. However, rather than breaking off for even a minute, she opted to work through the pain and try to keep a look out on everything. In so doing, she was able to spot a shift in the security feeds. Katkemat herself felt the temporal shuffle, but was too focused on the ritual to do anything about it. A warning call from Carracci describing a "Temporal Adjustment" set most people on alert as they became aware of the presence of several clay pots that no one had really noticed until just now. These suddenly erupted into swarms of small, young stirges and this is when one of Kasper's cards was played.

With a calm command, the M-Com tactical units switched their ammo to a specialty ammo which the shotgun firing caused to produce a fine mist of chemicals targetted specifically at the biology of the stirges. Unfortunately, Thomas was caught by surprise and while he protected himself well enough, the surprise distracted him from the ritual enough that he suffered a painful feedback from the energies when he lost control of them for a moment. However, he was able to redirect the flaring energy as a decoy to draw off the constructs well out of town rather than reveal their position further.

The constructs were drawn off by the decoy and straight toward the current dwelling of the volcano spirit which Thomas and Katkemat had helped out with earlier. The end result of that meeting came in the form of a news report about a small eruption in a spot that was previously unknown to be active. While the eruption was short-lived and caused minimal damage, it did mean that there was a new point to be aware of, as far as the public was concerned. Of course, the public news didn't notice, or at least didn't mention, the unit of several metal constructs caught and melted in the lava.

Still suffering from the migraine, Carracci caught sight of a Suidobashi Heavy Industries team of mind-duped tactical types heading for the Water and Power facility. However, she was quickly and masterfully able to hack into the systems and lock the controls down such that it would be an inconvenience for most of the city, a headache for Water and Power, and absolutely ruin the SHI team's plans. She then dispatched Arachne and M-Com psychics to remove the delusions from the tactical team.

As the ritual came again to a close, the power of the ritual washed through East Asia and the Pacific as it added another piece to the puzzle barring the multiverse-eating entity from continuing to destablize their Earth. As with the ritual at Israel, the spirits of the lands about Japan, China, the Pacific and East Asia all became aware of the actions of Thomas as the universe's Chosen champion against this threat.