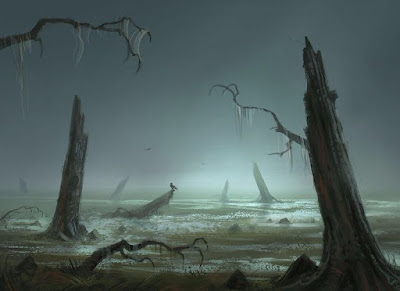 Leaving the second homestead around noon, we pressed south, eventually coming to the Moon-Lit Mire, a darksome place of deep bogs and where the clumps of trees prevents much in the way of light from filtering down into it. The waters are stagnant with only a few places here and there where the there is some little gurgle of a flow. It is an incredibly smelly place, rather reminiscent of that tiefling prior to his recent cleansing. As one of the only members without the benefit of being able to see in the dark, I was obliged to cast a light upon the crystal amulet I used to focus my powers.


Elanil offered to guide us through the paths of the swamp and one of us had the further idea to provide some safety by tying us to together using lengths of rope as a precaution against sucking bogs and quicksand. This proved fortunate as it was relatively quickly when one of our guide's sharp turns to avoid some patch of ground was missed by Khodrin, our new dwarven companion, and he ended up sinking slowly into the mire.

Pulling him out was quite easy though it came with the disconcerting discovery of a disembodied hand grasping at his foot. Looking outward into the gloom we saw that there were many figures, shambling undead of some sort, crawling through the mire and heading westward toward Athlin. They seemed to be paying only minimal attention to us, with the exception of the hand which seemed set on climbing the dwarf's form. The hand, however, was easily tossed.

We had some quite discussion on how to address this situation and decided that the urgency of our own task combined with the slow moving nature of these skeletons and zombies was such that it would be better to move on rather than delay our progress here. Among other things, as these creatures were making for a straight line toward Athlin, they seemed likely to miss a good number of the homesteads, which should be evacuated anyway, and pass right through various hazards such as the spiders, assuming there are more of those further east. Also, this horde seem to move much slower than we do so it is likely that we can get our task done and still intercept them before they reach Athlin.

We had one more close call with a mire before we eventually came to a high mound and went about setting up camp. I am uncertain what time it was, though even with the interminable gloom of the swamp I feel that we had pressed on far into the night before stopping. This revealed to us new issues as it became apparent that no one had any appropriate wood for maintaining a camp fire. We were obliged to pile together a group of torches and burn those. I won't need the light, of course, given that I can always produce my own, but I do hope that we won't find a need for fire later on. I suppose in that case one or the other of us wielders of power would be able to provide something.

The camp was awakened at one point by that tiefling though it seemed at first to be a false alarm. There were some will'o'wisps about the camp and we were assured that as long as we didn't go out of our way then the wisps would be of no bother to us. Which makes me wonder what was going on during the next period of watch when we were awakened to find Miss Crest, Dame TJ, and Miss Freehand engaged in a conflict with these wisps.

They were nimble and vicious creatures, capable of producing a painful shock to their targets that caused me to worry about the effectiveness of most of my magics. It also became apparent that the weapons carried by our group were capable of managing little in the way of actual damage. There were three of the creatures, which were being held somewhat at bay by Miss Crest's moonlight beam and Panry's discordant morning "singing" voice.

For my part, I could not find anything to hurl with the catapult spell which would not endanger us and I reasoned that my electrical magics would be largely ineffective, so I reached for a bit of something I have developed as a benefit of knowing my wife Hellenae and released a ray of frost upon these monsters. By luck, I managed to hit at least twice, though the beasts evaded most of mine and that tiefling's blasts. Thankfully, these beasts had roused the ire of Dame TJ's orcish blood and the last of them vanished in a flash of radiant energy.

In the wake of the fight, we discovered a chest of some kind with some modicum of treasure and I wonder whether or not the sudden fight had something to do with that find. Regardless, we now had to deal with the issue that one of our number had opted to cut themselves free of the ropes tying us to together. I'm still not altogether clear on why we left the ropes tied to us while we were sleeping. I think it had something to do with falling off the mound, but regardless, I was now obliged to provide my own length of rope to address the situation. To recover from the battle, we allowed ourselves to rest far into the day before moving on.

After the mound we came upon a stretch of paths which were united by planks that had been placed to allow one to walk from dry patch to dry patch. This is rather indicative of frequent use since otherwise I assume the planks would rot and fall into the swamp, but at least it took us out of the swamp with relative speed and ease. We are now starting the ascent to the Moonlight Monastery and our guide hopes it will go as quickly as two days. I dread to think what others of the knights might have died while we tarried or how our town has been threatened.

But no matter, the task is before us and....hmm, there is some commotion ahead. I think I see some legs sticking out of a bush for some absurd reason. I shall return to this report at a later date.