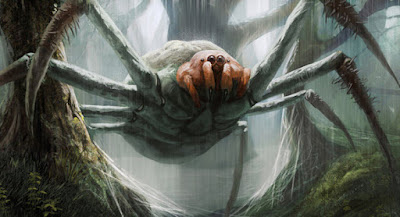 Upon waking up in the following morning, we set about to perform the task we likely should have
addressed to begin with, that of dealing with the corpses of our opponents in the previous battle. Upon doing so we found that several of the corpses had vanished. Given the presence of undead in the area, this had us immediately concerned. Sylvia and her children set about packing whatever they could for the trip to the monastery while two of the knights left to start the process of gathering the various homesteads to be evacuated to the north.

As for us, we moved south, initially with eyes on our task but upon discovering the trail of something moving south we followed that and came to a wide clearing of tall grass. In several places, the grass had been shaped into twisting funnels that were hidden by the surrounding vegetation and almost impossible to see if you weren’t expecting them, but, having seen one of the things, I was quickly able to identify several others.

The party was uncertain what these structures were and some of us had a more cautious approach to the situation than others. That tiefling decided to walk up to one of these funnel structures and stick their hand into it. This resulted in a nasty bite as the spider within took offense at the intrusion and moved to the attack.

That tiefling retreated back to the group while myself and Miss Freehand intercepted their arachnid attacker. The rest of the group decided to move on another of the funnels. The spider in front of myself and Miss Freehand was severely damaged by her before exploding under the barrage of lightning that I released upon it. Behind us, a second spider was roused and being dealt with as we moved on to a third.

It was about this time that Dame TJ noted that the spiders were only attacking when directly provoked and a case was made for simply avoiding the remaining creatures after we’d dealt with these three. I acquiesced on the condition that we would continue killing these creatures should it become apparent that they had been preying upon the local homesteaders. However, an investigation of the disturbed funnels found that only more of those dog-creatures had been targeted by these creatures. This included several corpses that had originated from our battle the previous day.

Stripping what valuables we could, we continued on and found another homestead to take a rest at some time before the sun reached its crest. We relayed the information about the dog-creatures and undead to the man and told him that he should be looking to head to Sylvia’s homestead where the evacuation was being organized.

He took a little bit of convincing to move on as he had not seen signs of the dog-creatuers or the undead yet. At this point there may have been an indiscrete slip of the tongue on my part in the manner of an insensitive revelation that we may have discovered one of his neighbors being eaten by a sort of vombie, vampire thing.

Further warnings about the spiders and how they should affect his travel revealed something else unexpected. Apparently the homesteaders all know about the spiders and simply give them their space on the idea that they keep the population of undesirables down by quite a bit and thus protect the homesteads in at least one direction. Thinking back to the number of dog-like corpses that we’d found, I could concur that this seemed a somewhat reasonable thing to do.

Despite this, however, I have to wonder about the wisdom of this particular strategy. I suppose if the population of spiders is kept controlled then it presents a good defense and given their reluctance to defend their neighbors it would seem a relatively easy task to cull their numbers if they grew too large, but I still begin to fear that a lack of food in the form of aggressive invaders from beyond the borders would result in these spiders turning their expert stealth on the livestock and framers of the area. It is something I shall have to discuss I think with Hellenae later.