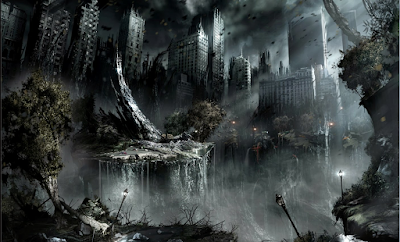 The City is an amalgam of multiple cities from all over reality. It's an uncoordinated mess of rammed together features from cities past, present, and future. Out of all of Nowhere, it is probably the most stable location. That's because it's the most populated. All those people dwelling in it makes it easier to keep locations within a good reference to each other. Even then, however, some locations can be unhitched from each other. There's always a store or building that most people don't notice and, after sometime, it might just get moved out of the street and replaced with something else. Entire neighborhoods might shift and rotate while the residents go about their daily lives blissfully ignorant.  The City is part of Nowhere, it is a place to lose yourself, whether you want to or not, and it resists all of our attempts to tame it into something predictable.

It's hard to keep an office in a place like this. Back on Earth you could rent an office space and advertise its address knowing that it would remain in that relative location whether or not you were looking at it. Of course, on Earth, I was a music theory student with lots of family money who didn't really need clients. Investigations were a matter of duty and curiosity rather than income, though Department 7 certainly paid well enough for cases. In this place, food, bullets, clothing, everything had to be scrounged up and if someone had what you needed, you had to hope you could find something that they needed.


Still, it's good to be an investigator here. When people know that you can find things, they come to you and when they find what they need to find off they go, usually leaving a small pile of goods behind to serve as payment. That's what Petrilly came to hire me fore. Halfling woman, looked like she could handle herself in a fight though I never got to see it.


She came to me with a recurring dream looking for a box of some sort. I'm still not convinced the dream was what she needed to find to escape, but we'll never know now. She gave me a sketch of the box from her dreams and from that I was able to connect it to a demigoddess by the name of Istryx who was the daughter of a god or goddess of Knowledge and herself was a patron of secrets. Petrilly was planning an expedition to the Catacombs, one of the other islands in Nowhere, and I gathered some people to help out.


Jones was one of those. He's dead. He has been since I first met him. The old me would have said that was a bad thing, but if you're in Nowhere long enough you start to accept a bunch of weirdness. A cloaked skeleton can be a good back-up as long as they're not running about killing people. That's where most vampires and ghouls fail, of course, or mind flayers for that matter.


Regardless, Jones had an interesting reaction to the image I showed him. He destroyed it and urged me to get off the case. He apparently knew this entity as Truc. Istryx I had run across a handful of times in obscure Shadow texts back on Earth, but never the name Truc. It does make sense that a goddess of secrets would have more than one name however. Still, I was obligated to look into this and Jones was the only person I knew who'd been further into the actual Catacombs and come back. So it took some doing, but eventually I convinced him to come with me. So I asked him to get a ship set while I went to meet my client.


The client was staying in the bad side of town, wherever that happened to be at the moment. Because of that, I opted to go as Karl Thrumhamarr, a dwarven identity I take on for dealing with the rough parts of town where it's not good to be a fragile looking half-elf, or changeling, female. I met Alby there, he's an interesting sort. Looks human, looks like a child, but from what I can gather he's been kicking around Nowhere for hundreds of years. He's good in a fight, there's a lot of strength and violence in his hands and that spiked club of his. 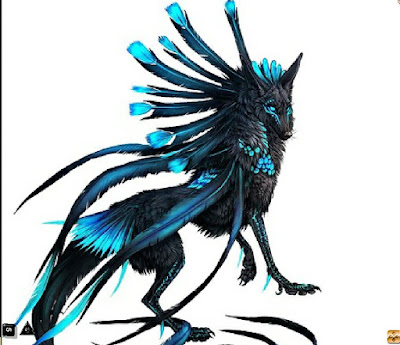 Unfortunately, we were a bit too late. The inn came under attack by a bunch of men and women.
Cultists. And you may ask how I knew they were cultists, but trust me, when you've been doing this as long as I have, you end up figuring out how to recognize cultists pretty quickly. They were supported by something else. It looked sort of like a cross between a peacock and dog and teleported around the inn like the blink dog inventory clerk back in Department 7's Berlin office. This one was certainly not nearly as friendly, however. By the time we were even able to fight through to a clear line of sight to Petrilly, she was already dead and gone.


We did manage to kill or drive off most of her attackers though. Afterwards, we found an interesting find in the form of a book which would refuse any sort of writing. It just vanished. Given the fact that we were dealing with an entity obsessed with secrets, I felt that was too much of a coincidence not to be connected and took it with me as I went to connect to Jones and tell him the news.


I decided to pursue the case regardless of the client's death, call it professional pride, and let Jones guide us out to the Catacombs. The surface of the Catacombs seems like a simple, small island with an old graveyard, but the bulk of it is under the ground. Catacombs are underground, after all. The Caverns were a similar sort of island, but at least people had come back from the Caverns in the past. Now we found ourselves facing a place no one had ever returned from. They either found themselves somewhere in the depths and upon doing so popped out of Nowhere, or else they all died down there. I imagine one or two might have found what they were looking for, but most likely just died.


The cultists were a bit prepared for us, unfortunately. Alby, Jones, and I came under assault by a number of odd looking amphibious creatures. But upon fighting through the them, we found ourselves facing a ritual of some kind. That dog was there again, and it seemed we were too late to stop the ritual itself as an entity of some kind appeared and killed all of the cultists as we watched. 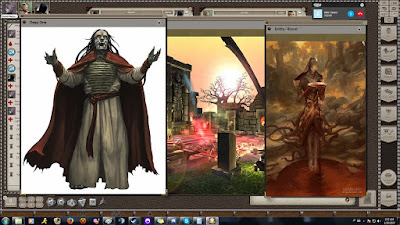 The dog and the entity left without a word to us, but the dog did leave me with something, an imprint of a pattern in my head. I wasn't exactly sure what to make of it at first. It was just a mass of twisting lines and various sized rectangles and squares. And then it hit me. That was a map of a massive labyrinth. 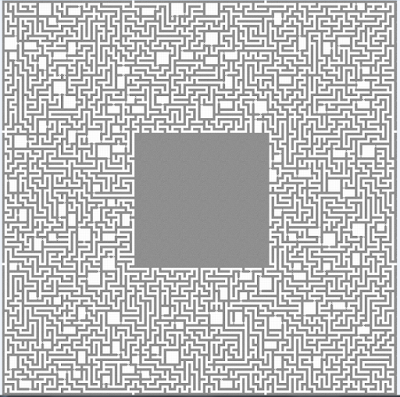 Jones cursed and declared that "she had gone too far this time". There was something about calling entities from the outside. Which is always a call for concern. Given my area of expertise my time with Department 7 almost always leaned toward looking into cultists to the outer reaches of the multiverse. The fact I have in me the blood of some of those aberrations from beyond the boundaries, specifically dopplegangers, probably added to that. It was never a good thing to hear about being dealt with. The idea that a demigoddess was reaching out to the aberrations was especially concerning.