Dreams of Corruption and Pursuit - Set 2: Enter the Sandman - City of Mists

There always seems to be snow in The City. Winter is the only season that really seems to imprint itself on the mind when you live here. Snow flutters in the air almost constantly even if there's none on the ground. Everybody walks around in long coats and scarves bundled up against the chill, hats with wide brims pulled low to keep the flittering flakes out of their eyes.

Colors are mostly dark. Thick cotton blacks, woolen browns, and cashmere greys that suck up as much heat as possible from the thin sunlight. A harsh neon glow touches everything and leeches the life from the world until it resembles a faded photograph. Occasionally, some spot of bright color stands out starkly from the muted surroundings. A spot of vibrant blood on a bleached handkerchief.

The Greasy Spoon is an outpost of warmth against the thick chill of the night air. It's not the only one, but it is ours. The building is old and chipped, but the air is warm and welcoming. They haven't yet switched the lighting to the buzzing, clicking fluorescent rods you get in a lot of offices these days. Of course, the waitress isn't particularly trusting when a couple of do-gooders start interrogating her about a nightmare she just had, but we're paranoid for good reason and whatever she believes you don't have a nightmare when you just doze off.

I've seen it happen in the War when someone is on the edge of severe sleep deprivation and I suppose there are people overworked enough here that it could happen. But not on such a wide scale. The waitress isn't the only one suffering from this and we were all a bit suspicious. Which is why we went off and did our things.

Kelsey went off and consulted his Muse and Evan meditated on the problem at hand. Ophelia went to the House of Black Feathers and sang her set. I beat a bit more of a mundane track and went to a 24-hour internet café to google recent events. There was a lot of stuff about people dozing off. Forum posts here and there. A few human interest stories and blogs, but nothing I thought was substantive. You remember, watching over my shoulder as I clicked through sites.

Eventually the sun started to rise and I put it away. I went home and got a little bit of sleep. Dreamless sleep at that and it put me in the mind of the fact that Kelsey hadn't had a dream the night before either. It seemed like whatever was going on was less a matter of the dreams and more a matter of the night.

Do you remember what time it was when I got up and thought about this? It wasn't quite noon, I think. That sounds about right. In any case, it was the only epiphany I had from the night's research so I decided to go touch base with Liza.

Liza Anzhelina is one of us. There's something in her that's not quite human. I'm not entirely sure what it is. There's no fangs or ruby lips to give her away the way my Contact shows on me. But it's there, a sort of whispering on the wind when you're talking to her that might be your name and might be something else. That wasn't why I wanted to talk to her, though.

More than any of the rest of us, Liza has contact with the streets. She volunteers at a number of shelters and soup kitchens around the city. Prowling the alleys at night doesn't make a person connections the way feeding them soup does. There's lots of information that comes through her hands day in and day out, though most cops would probably dismiss it.

In this case she had a gold mine. There was a man by the name of Bob who helped out a lot of soup kitchens. He'd had some severe nightmares of late, more so than most of the people touched by whatever was leaning into The City.

By happenstance, the others seemed to have the same thought I did and I met them coming in to Liza's shelter as I was about to head out. Kelsey had gotten some side-story thought about an executive's secretary and Evan had touched on his Contact just a bit more. But between us the biggest lead we had was Bob, so that's who we went to see.

Have you ever seen such a large man?

I was standing. I'm not what you'd call short. Especially not with the odd post-twenty growth spurt I'd had since I made Contact. I've a rather more regal stature, actually, and yet this man was meeting me eye-to-eye while he sat and I stood. There was a simple sort of friendliness to him, as well. That sort of impression you get from a wide-eyed dog eagerly awaiting you to come home.

Asking him about dreams drained that friendliness quickly enough and he was desperately extoling us "don't sleep past the pizza place." There wasn't much question about which pizza place he meant, as there was one within view of where we held the interview. The conversation made something click with all the google-search and forum diving I'd been doing earlier.

Having looked at a lot of the stories, it seemed that the worst experiences came as you got further north. At least up to a certain point and then it started to taper off. In fact, the epicenter of these dreams seemed to be somewhere between that pizza-place and the municipal swimming pool a few blocks further north. For that matter, Kelsey seemed to remember that a Medhall executive had his personal residence somewhere in that area which coincided with the side-story about a secretary and an executive that his Muse had given him earlier.

I might have gone looking into that, but something else Bob said got me thinking. He suggested that we should sleep on the train, because its warm. So, that led us to a ride on the Yellow Line, the outer loop of the city rail system.

If there is something that could be said of the trains it is that they were indeed warm and well-lit for the most part. I could almost feel it trying to lull me into sleep. But this time, I had an idea.

You remember that trick Dr. Wen has been trying out with me, right? Lucid dreaming, I think he said it was. A bit of self-hypnosis meant to give you a handle on your own subconscious. It felt like something I could use to take a bit of control over this dream. It seemed to work out right.

Apparently that was a woman. Early twenties, slim and leggy. She had a dismissive attitude as she looked over a shoulder and called out to "Jessica" that there were more heroes "in here." Then she turned around to attack me. I didn't feel like wasting my time in a dream fight with a whiny girl. Maybe that's my Contact in me talking. Likely this woman is more dangerous than I'm thinking, but regardless, I got out well enough.

A katana did appear out of nowhere in my hand. I'd originally just planned on slashing her with my nails, giving the intrusively aggressive puppy a scratch on the nose to make them think, so I was a bit surprised when the blade appeared at least until I snapped awake to find Evan shaking me awake. Before I could say much else, Ophelia was crying out in terror as she woke clutching herself and her phone clattering to the floor of the train car. Next thing, Evan was out like a light and remained so for several more minutes before waking up himself with his sword in hand.

That brought us back around to The Greasy Spoon to pool thoughts and give Ophelia a chance to collect herself after her encounter. She's being a bit cagey with whatever she saw, but who can blame her. It must have been something horrific but that covers a lot of ground. For my own part, I'd come to realize that they had been trying to craft a specific image against me, but couldn't find one. It put me in mind of something.

Liza has claimed that I had forgotten how to die, somehow. That my name and death no longer touched or kept contact. I don't know how one forgets how to die, but the matter remains. If death is no longer a part of me, perhaps that's why they couldn't find an image to cover my nightmare. Perhaps that is why I could walk out of the dream with barely a moment's thought for its guardian.

That might turn out to be important, but my thoughts right now are on Kelsey. At the end there when his Muse clutched him and he started filling page after page with writing. You saw that, right? You saw the letters he was jotting down in that notebook. That wasn't the alphabet. In fact, we've seen those letters before, back in The Tomb. I'm going to have to have a talk with him later see if he can get his Muse to tell me more about my Contact.

For now, though, we have another lead. Spawned when Ophelia shared a bit of Irish coffee with the horror writer. A moon bitch and three guardians. Of mind, of might, and of clever, clever cunning. So far, I'm not too concerned. It feels like something we'll be able to wrap up pretty quickly. 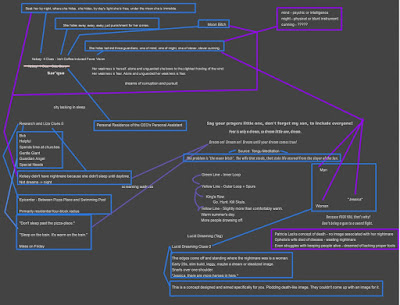