The Cases of Kanti Messner 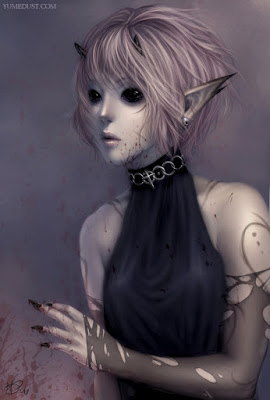 The homeworld of Kanti Messner is one very like to our own. The continents and maps are familiar with names such as England and Germany and devices like modems, smartphones, and airplanes. The main difference is that there are beings other humans in this world. Elves, orcs, goblins, and other beings dwell within this realm going about their business invisible to the rest of the world who mostly only see just another person.This realm exists at the core of a Charbydis like influx of energy that occasionally swirls down into the realm, preventing all exit and sometimes pushes outward making it nearly impossible to get in.

Kanti was born during a period of influx to a German family of changelings and grew up to investigate occult occurrences with Department 7 until such a case improbably sent her spinning out of the realm and left her stranded in a place known alternately as Nowhere or The Lost, where there were an endless number of islands, each representing a different environment where you could become lost. The City, The Desert, The Jungle, The Plains, The Arctic...any place that one could get lost.

The only way to escape was to discover what you were seeking, which at first meant that you had to learn what it is you were seeking. Kanti began to earn a living helping clients complete their own quests, getting paid in the form of things left behind when the person escaped the realm. She had little to no idea what her own quest was but something came along that would redirect her attention as powers from outside the Lost began to take interest in things taking place within the realm.


Case File 1 - Truc in Secrets
Side File - To be Written