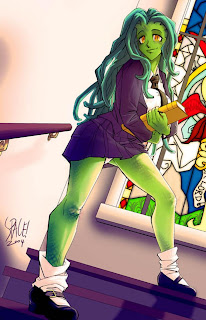 Terra was never actually a Scion character. She was a City of Heroes character, an Earth-Radiation Scraptroller from the early days before Poison was an available power set and well before NCSoft pulled the plug. Her backstory was that she had been visiting a museum some time after her father's death and stumbled upon a medallion of some sort that caused her heritage as descending from the gorgons to awaken. The shock of the change knocked her out of her depression somewhat and led to her career in superheroics. As she didn't have much money, she mostly fought in her skull uniform trusting that being a gorgon was distinctive enough for a costume. Eventually, public thought was so tied up into the idea of her dressed in a skirt, blazer jacket, blouse, and tie that to some degree her magic is strengthened and tied to it, so she continues to dress in private school dress even later in her career.

I considered making her in Scion 1st edition once or twice, but the ability just wasn't there to do so until you after you'd acquired quite a few knacks. 2nd edition, however, introduces supernatural origin paths allowing you to create legendary beings other than just spawn of the gods. The currently released backer preview includes origin paths for kitsune, satyr, wolf-warriors, and cu saith which can be easily adapted to other things like tanuki, deer women, amazons, and hell hounds, for instance. Following the example of these, my playgroup have currently created two origin paths: vampyr and serpent.

The concept here is based on the theory that Medusa was also worshipped as a goddess at one point and since all myths are true even if they're contradictory, the goddess Medusa can exist alongside of and counter to the monster Medusa. You'd expect that this back story would put her into the Theoi pantheon with Zeus and the like, but given the gorgons' past history with that group, this little gorgon has gone looking for other groups to shelter and teach her. One of my friends suggested Nu Wa of the Shen, and this works out well since Terra tended to emphasize the role of Healer more than Destroyer. Though in this case, I'll start with Guardian since her early career path in City of Heroes was as one of my solo characters.

As a further note, I've built this character a little bit different. I used the assumptions from the character creation examples rather than the text. It has been admitted that the back preview may have come from an earlier draft of the book, so we've been finding a lot of inconsistencies in the way things work in places. Previously, I went on the assumption that the text was the most up to date and the examples hadn't been updated. Given some of the wording of the email about draft issues and the build structure of the other characters, I'm assuming that my previous guess was wrong. Of course, we won't know until he get the corrected version of the book.

Concept: Inheritor of Medusa
Short Term Deed: Get a handle on this...whatever it is.
Long Term Deed: Find a safe place to live.
Divine Parent: Nu Wa (adopted)
Calling: The Guardian
Calling: Medusa is the mediator between heaven and man. - Leader- Terra's been touched by Fate and given the chance to eventually step into the role left vacant ever since Medusa was cursed and killed by the petty Theoi. She is the one that is meant to make sure that mortal and immortal treat each other with dignity and respect. There are gods and monsters who would prefer that role remain vacant as well as gorgons and heroes who would love to take the power Terra possesses. - Leadership, Empathy, Persuasion
Origin: Schoolgirl Gorgon - Chosen - Terra is only just recently out of high school and for some reason still has a tendency to dress in a manner recognizable as her old private school uniform. This sometimes has occasion to get her unwelcome attention. - Culture, Integrity, Occult
Pantheon: Adopted child of a dragon. - Shen - The Shen might have their own plans for Terra, but at the very least they have treated her well and taken her into their fold to make sure that she can't be easily taken advantage of by bloodthirsty Theoi or others. - Academics, Leadership, Occult