My footsteps echo strangely off wet concrete in the small hours of the night. I glide through the profusion of sound against steel, concrete and glass, under my umbrella, stray frozen droplets stinging my face.


Sam guides me safely through the misty blur of the harsh reality beyond the rim of my umbrella, navigating around sodden piles of trash some assholes dump in the middle of the footpath. He’s a good dog. Apart from him, I’m alone in the silent, dark, street, not even a car passing by to break the silence. It’s a relief to finally enter Maxine’s apartment building despite the worn, rat-eaten, carpet and peeling wallpaper.


At least it’s warm inside. I avoid the elevator and take the stares, scared of the ancient cage-like contraption’s rattling cables and squealing gears. I’m puffing by the time I get to Maxine’s floor. The apartment hallways are as lonely as the street, traces of inhabitation left behind like ghosts.


The moment I get to Maxine’s door, I know something’s wrong. Sam starts shying away from it and growling. I can feel my heart pounding as chills crawl across my skin. My first thought is that Maxine needs help, my brain skipping past the idea of knocking as I fumble with my keys.


There’s a sound of glass hitting the floor as my keys hit the lock, as if someone knocked something over in surprise. It’s too late. The sight beyond the door, red blotches across the walls and floor. A tall, dark, figure leaning over a bloody mess of rags and flesh, the gleam of a blade in their fist.


I fall backwards as Sam charges, savaging the figure’s arm. He’s a good dog. Was a good dog. I see the moment his life is severed in a single, clean, blow, my eyes wide to the horror, seeing everything for the first time in terrible clarity. Someone screams, loud enough to shatter glass. It’s a while before I realize that someone is me.

He comes, dark trench coat swirling in his wake, gouging a long cut in the wall where my head should have been. Our eyes meet and I see not anger or hatred in them, but terror.


“Police!” someone shouts in an authoritative tone.

It seems neither of us want anything to do with that. He flees back through Maxine’s apartment, I stumble to my feet and hit the emergency stairwell not knowing how I’m getting anywhere without Sam, not knowing where I can go...


Do you ever have that sense that someone might be a little bit familiar? You can't say when or where you ever met a person, but you have a odd sensation that, maybe, they were important at one time? Maybe that's why you watch me all the time?

Anyway, I was helping out around the church with Liza when someone stumbled into the soap kitchen and started calling for sanctuary. That's when I had the feeling I was talking about before. That feeling of deja vu tingling in the back of my mind. Maybe you noticed it before I did. I was focused on the girl. She was terrified and you don't go calling for sanctuary if you're not afraid of something pursuing you.

Liza was further in the building and a bit burdened by bowls and spoons, so I moved to pick up the girl and help her stand up. She was exhausted and there was something about her skin, it seemed a bit scaly in the light. I set that aside while I was supporting her and assuring her that she was safe. As soon as I could, I got her out of the doorway and helped transfer her to Liza while I looked out the door. There was nothing but darkness but something nagged at me.

Meanwhile, Liza had taken her into the church proper so she could benefit from official sanctuary. She gave her name as Hayley and after a bit of reassurance Liza started doing her thing. Give your name to her and she can either shield you from everything or grind you down into dust. Give her a fake name and things are bit more difficult.

Hayley reported her story readily enough. She had gone to visit an old friend and her service dog had started growling. Thinking her friend was in danger, she burst in the room and found herself on the scene of a murder. The dog attacked the man to defend her, but was killed then he turned to attack her. Which was when she saw his face.

The last surprised her a bit because apparently she's legally blind. She can only see blotches and the like here and there. But this person's face she saw clearly and we found that the description was familiar to us as well. Liza and I shared a look as she described a man with a moderately feminine face and a somewhat characteristic sort of glasses.

I asked her if she wanted us to take her to the police and she asked that we didn't. Apparently she's not quite here legally and doesn't have the best of relationships with the police. I assured her that we wouldn't be going to the police about her.

The girl expressed some worry about being a burden and behaving in a silly way so I tried to assure her that she wasn't. Hell, I talk to someone invisibly watching my every day, who the hell am I to call anybody's response to trauma "silly"? Her hands were a bit cold, the shock was obvious even if she didn't have any visible injuries. I tried to warm them up by rubbing them as Liza assured her that the brothers of the church would be able find something for her to do while she stayed in the building.

I made my excuses and stepped away before heading out into the street to see what I could do about tracking back her path. It wasn't difficult, Henderson Apartments were swarming with cops and onlookers. I tried to step closer and listen in as casually as possible. Doing so I managed to hear that there were two other victims and a few other interesting details.

Unfortunately, being an unnaturally beautiful woman stands out in the poor parts of town. I'd blend in better in another neighborhood, but my investments wouldn't support that and the VA pays for both squat and spit. One of the cops stepped over to talk to me, an Arthur Kendrick. I suppose I could have tried to lose him, but I felt it would be less problematic to just talk to him.

He didn't believe I lived in the area, because "you don't get nails like those without some sort of regimen." Yeah, blood, three times a day. I prefer cattle blood and pig's blood myself. They work into better recipes. Blood sausages. Black puddings. That sort of thing.

He asked for my name, and I gave it, I may be hearing back from the family relatively soon. Paul might decide to track down my apartment and give me a talking to about keeping my head down and not antagonizing the hag and the fiend whose genes spawned me.

He asked what I was doing there and I opted for suggesting that it was professional nostalgia and shared with him my old military ID. Not the veteran one for VA, nope, the old MP rank and assignment. The one that's had a hole punched through it and stamped in big red letters "INVALID". He mentioned looking up my record and that means I'm likely to hear Dr. Wen or the Captain soon.

Well, it's probably all me. Maybe it's you for all I know. Nah, you never give me any input. You just sit back there unseen and listen.

The next day, main and Liza's worries were confirmed with a little story in the paper. 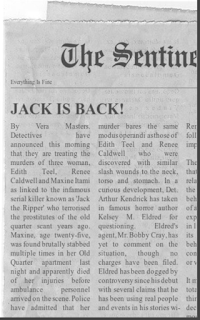 It seems like Kelsey had gotten himself into a little bit of trouble. If Hayley hadn't already come to Liza and myself, we'd already be pulled into this. When we met up later with Ophelia and Evan, we learned that they'd had some of their own encounters. Evan had been at the crime scene, for one, which makes me wish I'd seen him. It might have gone a little better for me with Detective Kendrick than it turned out doing so. Ophelia, meanwhile, had had a little conversation with a ghost that also mentioned Kelsey's name.

I'll get into detail with you later about the meeting we're having. Right now it's happening so not much to tell.

Set 2: Beauty and the Beast