Set 2: Beauty and the Beast


Can you hear that? Can you taste that? Mmm.

Every part of me feels so alive.

No, no. This is my contact. One of them. I can hear her in the back of my head. No not literally, it's a feeling. It's a sense of exultation that is somehow me and also not me. Do know what I'm talking about? I have to clear my head. I can't give her too much lead.


Anyway. Apparently my father took offense at Evan's interruption with our conversation. I fell behind Evan and Ophelia as we were walking along the street. We were planning to look into whether the Vera Sinclair who inherited the suspect bag was also Vera Masters, the reporter doing the articles on Jack the Ripper. As soon as I was separated, a car pushed past and did a drive-by on Evan and Ophelia, probably targeting Evan specifically.

Evan put himself in front of Ophelia to protect her from the brunt of the damage and both managed to get through alive as the car merged back into traffic and started heading my way. I took a turn out into the street and started running forward to meet it. I had a brief look at the expression on the gunmen's and driver's faces before I leaped and crashed through the windshield and took the head off of the driver.

Momentum took me into the back seat and there was a frantic moment where I started to think about how stupid I had just been. The man in the front was frantically trying to take control of the care where the dead driver's foot had locked on the accelerator. I meanwhile was trying not to get shot. That's when I bit one of them and tasted his blood.

I can still taste it.

I had thought my reaction to the blood of pigs and cows was strong. But this. This wasn't just flavor. This was power. I was stronger, I was faster, I was far more confident. It became almost child's play to undo their seat belts while they thought I was trying to grab their guns.

Then you saw it, I went at the man's throat this time. Had a lot more blood down my throat than the first time. It made me fast enough to throw them aside and clamber out of the car, directing it at brick wall in an abandoned building. I had to calm down a bit as I stood up and watched the car pancake against a wall. As soon as I turned around, the car exploded but I was a bit engrossed in the final bits of blood about my mouth and on my hands.

That's when my brother called, proving that this was our father's doing. Thing is, he may have thought he was a bit distant from me, but the blood made everything better. Including my voice. I had that hypnotic sound going on and it made it easy to bleed him of information. It started with asking me about what I was taking recently. I'm not sure he expected the answer to be "archaeology."

Forget it, this looks like where Evan and Ophelia went. Best to reconnect with them and give them the low down on the information I got from my brother. Wait, who's that at the table with them? 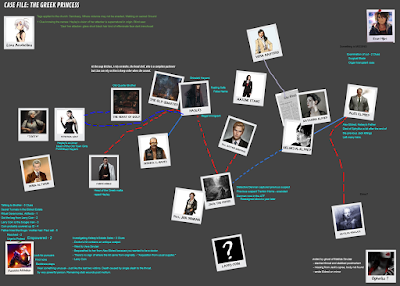