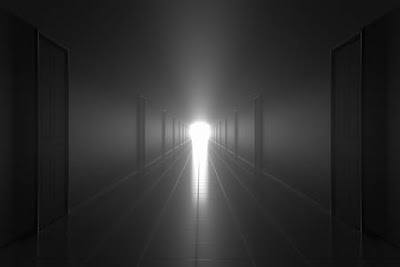 
The mists stretch on and on. The hallway is impossibly long with two many corners and intersections that curved on themselves or should have done...but didn't. The walls were mirrors that she could see through the mist. The glass must have been warped, or maybe the water droplets on the mist were warping the image itself.

She was barely able to make out her silhouette and features on the twisted and flat surface of the blackened silver. But she undeniably knew it was there and behind her, and at the end of the hall, and on any other surface she could cast her eyes on. She could just reach out and trace the edges of it.

Much more visible was the cracked jigsaw image of herself sitting in the back of the Pequod's with a cup of Earl Grey because what the coffee house called sweet tea was a blaspheme on anybody who grew up south of Mason Dixon.

You make toys of tools.

The voice was just behind her ear. It wasn't English. She wasn't certain if it was even words at all, though she heard the sibilant lisps and clicks.

Was it laughing at her? She could feel it on the back of her neck. Just breathing there and stirring the mist. She whirled around to find nothing and stepped unsteadily down the hall looking for the source of the sound.

In the mirrors, her twisted outline ran with her, scrolling endless past her sitting form repeated over and over. The clicking sound of something sharp clacking against the mirrors with a tinkling rhythmic caress following along inexorably.

The tinkling sound of sharp tapping turned into a screech careening through the halls as the her in the back of Pequod's step up and run for the the door. The image cascading across the walls in a million pieces and resolving into a scene of the outside, some guy with a camera standing there as a gangbanger fled pell mell through the streets away from the driver of the car that had just barely managed to avoid parking on him.

The man's fear resonated with her as she stumbled from wall to wall, looking for the edges in the mist and trying to pick out where the other was. In the walls, she took off after the gangbanger.

You can feel it. Smell it. Taste it.

She came to a skidding stop, breathing heavily and looking ahead of her through the fog for any sign of movement that wasn't in the mirrored walls. That voice had been ahead of her.

It was always behind her.

Why was it in front of her now?

"So, what are you running from?"

The thug harshly breathed in, recovering from his run. He stood up and loomed over her.

Need to see yourself the hero? This isn't your power.

"I ain't running from nothing."

"What, the Switchblade Disciples run from nothing now?"

The man snapped, turning hostile and snapped at her. If he had been less rattled, he'd likely have attacked her before she could even show a badge or a gun. And might not have cared if she had. Cracks appeared in the mirror running through the thug's face and reaching out to splinter that image of herself. The one that was part of that scene and not a twisted silhouette on a fun house mirror.

She herself stood rooted, twisting about and looking for any sign of her stalker or its direction.

It was behind her again and she fled. Tripping over her feet and slamming into the ground solidly, skidding across the flat surface like it was a playground slide in the rain. Freezing cold clutching at her skin and ripping across her like ice as she tried to find away to stop her skidding, tumbling fall.

And the floor was also mirrors.

Why had she never noticed that before?

The impact was solid on her back as the wind shoved out of her and the sound of glass cracking, fusing, and cracking again. Coughing, she struggled to stand up, seeing around her as she tried to get an image off her smartphone into the department's photo recognition software.

"Alejandro Tassis, two years for assault. Lots of arrests, only the one conviction. So what were you running from Alejandro?"

A wetness flowed down her forehead cold as ice so it couldn't be blood. It had to be from the mist. But it clung to her eyes as she stumbled away from the voice and cracked her head on another wall.


No hero. No power. No courage.

She couldn't see it but she could feel it there closing in and she clawed at the walls...or was it the floors? Trying to pull herself away from it. She could almost feel it wrapping around her ankles....

It was sweat. A cold sweat. And she was snapping awake, eyes wide, all sore and aching.

"Whoa, Cheyenne, you all right?"

The person in the door was her roommate, Shane, holding a cup of coffee which filled the room with a harsh, acrid scent.

"You're having a lot of those lately," they said.

"Don't diagnose me, you're not a doctor," Cheyenne muttered.

"Not yet. Anyway, I'm home from work, and I think you need to head out in the next hour or so?"