We had arrived at the police office within a day of the murder of Xahndyg Yellow-Coat, a court clerk, so Inspector Craftbrass took us to the crime scene at the court offices. Wyndelly began the process of investigating the flows of magic at the site, looking for signs of this Haberdashing's tricks. Kelmar started reading through a journal of some sort at the same time and I went out to the bullpen to lean back and skirt over the minds of our victim's coworkers. 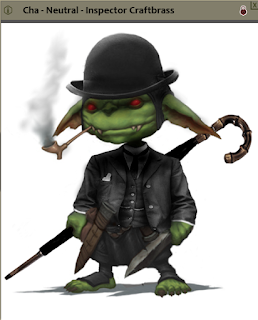 It produced an interesting bit of information. The other clerks were wondering who would be promoted to the now vacant spot. This was pertinent on its own, but the other response made things more intriguing. They weren't sure that promotion to Yellow-Coat's position was something anybody would want. This recent murder victim was someone attached to a prosecutor who worked a lot of political cases. The sort of person who would be prone to stumble onto dangerous information whether they know it or not.

We found a bit more information in the files, while Kelmar continued to read the minutia of the poor clerk's day to day life. We were looking to move on to other investigations when Kelmar finally sat down the journal and seemed to focus himself for a moment. I've seen him do this before and it is a preface to some sort of innate tracking ability he has. Indeed quite quickly he looked up and reported the presence of a cluster of aberrations under the city, which is sadly not unusual for a city of this size, but also the presence of a single aberration on the surface somewhere deeper into the city. That was far more concerning.

The sorts of aberrations that can move about on the surface without much issue are usually the more dangerous sorts. The ones that cluster in the sewers or other forgotten places are dangerous and need to be removed when discovered, but they tend to be of the sort that are used as soldiers or assassins. Weapons really. The sort that walk among people tend to be the type that draw out information and help establish cults to the outsiders. They're the sort that my family is descended from.

Unsurprisingly, we found ourselves outside the office of Greenbottle, Argentaumn, and Peppertale Incorporated. Moving into the building we made use of the badges we'd been offered to make entrance as we followed Kelmar's instincts toward the office of one Loopmottin Daergal. We were making a cautious approach when Nezeri's mace clattered into her shield and we suddenly heard the sound of breaking glass. 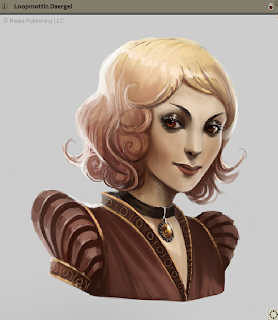 Kelmar moved like a shot and after he shoved open the door we had the chance to see a gnome woman smirking at us before she dived out the window and then suddenly a winged bird person was lifting up through the air. That's the thing. Dopplegangers are much more effective shapeshifters than most changelings. If we're going to compete, I think I will need to practice such skills a bit more.

In any case, Medi, Nezerri, Wyndelly, and myself took off down the stairs while Kelmar pursued the creature over the rooftops. He was able to shoot it down and Medi ontop of Alwyn was able to catch up and begin to take part in the effort to capture the creature. Nezeri was able to keep Wyndelly and I updated on its path so the slower of us could keep up with the chase. The doppleganger had changed from the bird creature to a wood elf at this point and was traveling the alleys now.

A familiarity to the events struck me then. My own path to the Lost had come at the hands of an interrupted ritual, one that I had interrupted myself, catapulting me into the demiplane, but most people came to the Lost by getting Lost. And among the paths to the Lost was in randomly moving through streets in a city, getting more and more disoriented and uncertain with where one was.

We already knew that our enemy had a definite presence in the Lost, despite it also being the center of Istryx's own power. Still it struck me that I could possibly counter this. I searched my head for the map we'd looked at regarding Haberdashing's crimes and tried to recall several street names in our area, calling out a running commentary of its progress. Hopefully keeping it's mind anchored in this realm and unable to trigger the transfer over to the Lost.

Whether this had any impact or not, I am uncertain, but Kelmar, Medi, and Alwyn had managed to catch the creature by the time Wyndelly and I caught up. They had managed to knock it unconscious and take it alive. Some discussion followed regarding where the doppleganger would be held. Kelmar suggested our tower, but I protested that strongly. I had no wish to setback Tonwen's work with the former rebels we'd taken on by exposing such vulnerable minds to a malicious telepath like a doppleganger.

My chosen words were not the best, chosen in haste and concern. Wyndelly seems to have taken offense, and I'm not sure specifically why. It is a thing I will have to address, but not when we're in front of these others. I've revealed too much about our business in front of others already.