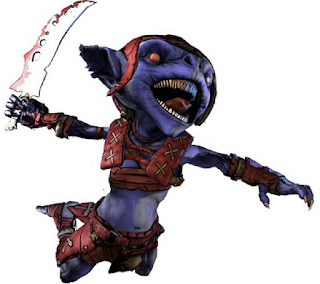 Bittersnap is an interesting study for a goblin. She is not the first of the breed that we have seen that behaved in a more feral nature, there were the goblins in the tunnels underneath the Abolist's Tower that behaved in a similar manner. There is also her psionic capabilities. I would like to know why it is that psionic ability is associated with blue or purple skin tone in that world. Is there something that gets into the blood that affects the coloration?
I wonder if a psionic variation of my own species would also turn out to have a blue fur-color. Actually, I'm not sure that fur colorations are affected by the presence of psionic potential. So it would be quite a bit more likely that the underlying skin would be blue while the fur would remain the standard colors we normally see. I doubt that would have much visual effect on matters. Which makes me wonder if there might already be such off-shoots on our world and just not yet recognized. They may have been mis-identified as sorcerers and encouraged to push their talents toward more well-known forms of magic. That is, I believe, part of how Kanti came into her bardic magic, using a trace of psionic potential inherited from aberrant blood to power arcane magic.

It certainly would prove useful. Bittersnap's resistance to psionic assault was quite useful during the assault of the previous night when those creatures sought to end our investigations into the disappearances at Hollowgard on the world of Vanderas. The monsters found it difficult to harm her, especially after she started screaming so loudly. I believe that may have been some sort enhanced rage of some kind. I have seen warriors make use of such abilities before.

The whole affair was a bit troublesome. I may have found myself quite startled and confused as to how handle the situation. The flying creatures created patches of shadow and flooded the area with a sort of artificial fear which was making it quite difficult to operate with our usual peak efficiency. Our marksmen certainly suffered from large swaths of the battlefield being impenetrable to our sight. I think it may be beneficial to consider addressing this issue to counter such occurrences in the future. 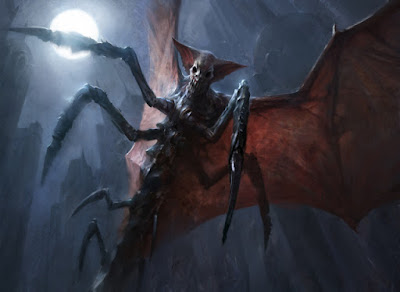 Fortunately we did survive the situation, else I would not be writing in this record now. In any case, if this is just an incidental assault, then I and Kizzy shall have much to face in the future. Kizzy being the other cleric we've recruited to aid with this mission. She comes from some sort of nomadic culture of tinkers and traders and seems to have some trace of dwarven blood in her ancestry. We did find her in jail and had to bail her out, there had been some sort of scuffle with the local constabulary. Given that none of them were dead I imagine she held back quite a bit. She even commiserated with one of the militia at the end though for some reason he seemed to be upset when I suggested that there were treatments that he could turn to. Curious.

Regardless, Kizzy is quite the formidable warrior summoning small hosts of azer-like spirits to fight with her and then focusing them all into her hammer to form a singular powerful strike and setting the opponent on flames. All the sorts of abilities that I assume would have made her confrontations with those militia that much more likely to have ended with their deaths if she had actually been serious about it. Her crafting capabilities are also most impressive. The mystical gift she has of forging items out of random bits has a lot of potential use. It has an upper cap of value for some reason, I'm not exactly sure how that works. But, regardless, in theory she could create necklaces of precious metals several times a day and slowly accumulate some level of wealth. That could then be transferred toward the purchase of other means and resources. 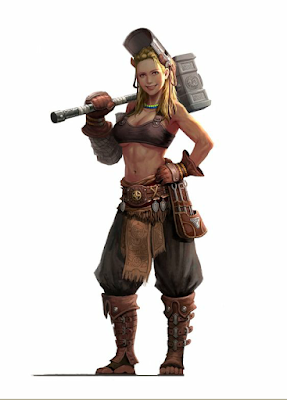 Though I'm not sure whether her gods would agree with that application or not. Though I understand that the dwarven culture has an appreciation of some sort for the accumulation of wealth.

In any case, Wyndelly and I seem to be the primary investigators on these missions, unless it happens to involve the wilds or tracking, in which case it it Kelmar. Kizzy and Bittersnap are present mostly to protect us in the course of our investigations and it so far has not proven to be a terrible decision. Quite the opposite actually. Though the Cloughdean representatives did seem to look to Bittersnap with some sort suspicion. I heard something that goblins in this realm have a reputation for being horrible or something, perhaps that is why.

In any case, the rest of us are quite odd for the surroundings as well, save maybe Wyndelly and Kizzy. Well, definitely Kizzy, this is the world of Kizzy's birth and dwelling, after all.

In any case, the authorities were quite able to fill us in on the disappearances and such as well as the history of Hollowgard itself. Correction, the Center had information on Hollowgard originally due to the encounter of past deva with the necromancer that now dwells there. This is a renewed investigation after that previous one found no sign of aberrant involvement. Which there may certainly now be present given the things that attacked us last night. Some of those had the look of powerful shades or wraiths, but they were aberrations rather than undead.

In any case, we are now set to continue on with the investigation. It shall be most interesting to see where things go from here.