Back in the days of City of Heroes, I was also first introduced to Durarara!!! and Baccano and among the characters there was one whose origin I just really loved: Shizuo Heiwajima.

Shizuo Heiwajima had anger management issues. Despite his best efforts. He was at all times on the edge of stepping over into a berserk rage. He has no explanation for this. His childhood wasn't traumatic, he never went through any experiments, he never did any special training, it just suddenly started one day when his younger brother did something that angered him and he responded by throwing the refrigerator through a wall. Initially, his body wasn't able to keep up with the strength he exhibited while angry and every time he lost his temper he ended up in the hospital. But he always healed, and he always healed back stronger. Eventually, his body developed into something that could handle his insane strength. Unfortunately he's only ever had minimal ability to control his anger. There are a few people he likes that keep him anchored and he himself would love to just live a peaceful life free of his anger, but it just doesn't seem in the cards for him. For a time his brother tried to find him jobs but he always lost them when his temper went off. The last of these jobs was as a bartender. After which he got a job being the bodyguard for a debt collector, maybe a loan shark. At first he was suspicious but was mollified when it was suggested that his mere presence would keep anything from getting out of hand. And it was a job he could do. He continued to wear the bartender outfit and dye his hair blonde as ways to make himself easily recognizable so that everybody would know to be careful around him and not anger him.

So, I decided to make a character based on that concept. At the time, the Villain archetypes hadn't been released to start as heroes yet, but the Praetorian world starter had been released. So I started a Praetorian Brute with Super Strength and Willpower. I named her Tender Bar as a reference to his mode of dress and went further on her origin to confirm that no one had been able to find any sign of a reason for her abilities. No psionics, no genetic markers, no chemical traces, no obscure martial arts technique, no magic, no cybernetics. It just seems like she gets angry and things break. Just like Shizuo Heiwajima.

I eventually took her to level fifty and as far into the Incarnate stuff as I could manage. For those that don't know, an Incarnate in the game is someone who has pushed past the prior boundaries of what it was possible for a resident of Earth to achieve. I'd say human, but due to the open origin design, there were plenty of non-humans on Earth. In the fiction of the game there are two ways to become an incarnate. One, the method taken by game icons Statesman and Lord Recluse, was to taken the mantle of an incarnate from the past. This had the advantage of rocketing you forward into massive amounts of power all at once, but it also left you vulnerable to the machinations of the Well of the Furies. In truth, the Well of the Furies is just one of the many artifacts or places through which the Well can be  accessed for rapidly acquired power. The Well, whatever its true name, represented the accumulated potential of all the residents of Earth. It was neither good nor evil and would simply grant power based on the strength of will it perceived in those seeking it. And for those that would take past mantles, it would puppet them occasionally in order to manipulate events. All of Lord Recluse's machinations were aimed at escaping the influence of the Well. This method of gaining power was not available to players. We had to do the slow method which the fiction referred to as forming a new mantle with new powers and new rules. 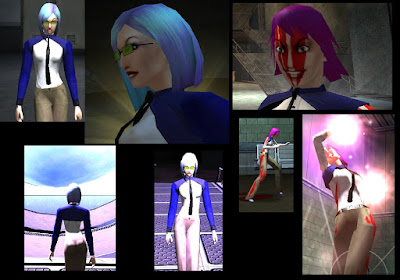 So, essentially, by the time the game had come down. Tender Bar had progressed to being a living incarnation of human rage. Since incarnations were nigh immortal and each mantle had only one successful means of killing them finally, she was at that point essentially a physical god. But there was still, crucially, no real explanation for how she had gotten powerful enough to reach that level. As far as any test showed, she was just a human being, nothing particularly special. Still, eventually she had punched Mot, one of the major eldritch horrors of the setting, into dormancy again and had defeated Statesman's killer and the usurper of his power in solo combat...while he whined about the motivation for his crimes being how fed up he was that normal humans could never compete with the superhumans. I swear, I had no idea that would be his motivation when I made this character, the Death of Statesman storyline hadn't even been annoucned when I created her, but the irony of his complaints while fighting a "normal human" who had bull-force raged her way into virtual godhood was so terribly amusing. 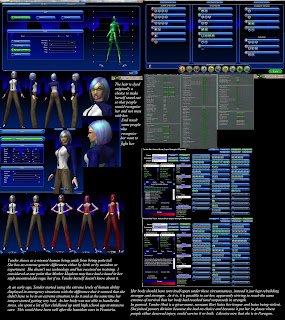 Among other things I did with Tender was that I had five costumes showing her clothes growing increasingly bloody and her expression becoming increasingly swimming in pure unbridled rage. This came along with about 144 keybinding files which would automatically shift through each other and eventually causing my character to shift into the next costume level. The use of the Rage power, a key part of the Willpower power-set, advanced the point to where she was more and more prone to a costume shift, but the actual costume shift was tied to a power use that shifted based on which keybinding file was active and there was no sign given to me which keybinding was loaded at any given moment. I knew which set I was in based on whether or not I had recently used Rage and what costume I was using, but not where the increased bloodiness would happen. To further model the rage, I also started shuffling around commands from their normal positioning on my keyboard so the bloodier she got, the less predictable she got. This included triggering the Follow command or turning it off with different power uses meaning she sometimes would chase people all over the place, change targets or continue chasing one target but slam into random others. I filtered in some dialogue bits and judging by those I would know whether she was in a focused (one target which she followed) or wading (switching targets on every hit) mood and I kept the button to shift that behavior between focus and wading unshuffled so I had some control over her. (I also had a seperate, less complex keybinding set that had much less dialogue and none of the keybind shuffling, but just the costume changes for the rare times I would play her in a team with other players. Because as entertaining as that keybinding set was, it would be a pain on team and would be rude to use. As would spamming the chat with dialogue all the time.
Recently I was toying around with Mutants and Masterminds Third Editions' Quick Character generator and this character came to mind, so I figured I'd make a few versions of her for different game systems. I'm planning on starting with Mutants and Masterminds Third Edition to start. I am not going to go for a straight one to one conversion, of course. That's pretty much impossible to get done in both a satisfying and efficient way. I'm just going to go with the basic concept.

I'm also going to start with her being at about mid level in the MMO, or starting level for M&M. In other words, Power Level 10.