This is an M&M recreation of my old City of Heroes character, Tender Bar. I'm using the quickstart character generator, but for obvious reasons, I'm not doing a random build. I'm also not limiting myself to power sets for one template. Fortunately, the point costs for each template are noted down and so accounting will be relatively easy to do. I considered starting with the Powerhouse stat set, but that is designed around the idea of enhanced strength and stamina whereas, as far as anyone can tell, Tender's strength is somehow natural. As such, I am going for the altered human warrior attribute set.

This is 78 points of abilities, a little bit more than half of her points. I'm tempted to start altering things here, but instead, I'll wait til I get to a full 150 points. I may even hold to the Warrior archetype until I hit 150 points and see where I can move stuff around before I start altering the points in any given package. (As a further note, I do have a gorgon archer made for this system and I haven't copied her to the blog yet).

I'm going to give her the Warrior Advantage set of Survivor, which is Diehard, Great Endurance, and Ultimate Effort. I'm also going to give her Daze(Intimidation), Skill Mastery(Intimidation), Startle, Improved Smash, Fearless, and Improved Grab. Most of those aren't in any of the Warrior advantage packs, but it brings me to the 9 Warriors have. I am thinking she needs a few more things to reach the concept entirely.

Warriors have 17 points in skills, which translates to 34 ranks. I think 12 ranks of Intimidation and Insight are called for (it's nearly impossible to pull one over on Shizuo, and Tender is based on him). That leaves 10 more ranks. I think Athletics 6 and Perception 4. 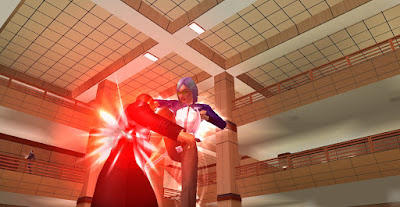 The Warrior archetype allocates 32 points for powers. So first, Willpower was a sort of Regeneration heavy power set, so I'm going to grab the Healing Factor from Altered Human. That's 16 points. Then, looking at the other powers in this set I'm looking at the Berserker Rage power combination for obvious reasons. That would be the following sets of powers.

Enhanced Stamina 2, Immunity 2 (Disease, Poison), Regeneration 10, Enhanced Strength 2, Enhanced Advantage (Close Attack 3), and Immunity 10 (Emotional Effects, Interpersonal skills). The immunity to interpersonal skills is especially interesting given Shizuo was the one person in the series that regularly saw through all the tricks of the main manipulator. Mostly because his frame of thought was far too straightforward for the manipulator to be able to deal with. There is also an Activation Flaw that's normally attached to the Immunity, but instead I'm going to remove the Close Attack and instead increase Enhanced Stamina and Strength to 3 each while removing that Activation bit on the Immunity. As to why, I want her to favor damage over accuracy and close attack would shove her unarmed attack bonus to +13 which would limit her potential damage to +7 since the max the two bonuses can combine to is Power Level +10, which in this case is 20.

This brings me to defenses which the Warrior template adds as +4 Dodge, +2 Parry, +2 Fortitude, and +6 Will. Dodge is based on Agility, Parry on Fighting, Fortitude and Toughness on Stamina, and Will is based on Awareness. However, there are some limits and some of my early changes have hit two of those, with Fortitude and Will not being allowed to collectively surpass 20. So a Fortitude potential of +11 and a Will of +10 isn't doable. The same problem comes with Parry and Toughness combined surpassing 20. In this case I want Toughness to be the higher amount, so I will just remove the Parry bonus as well as a +1 Fortitude. This will leave her with a floating 3 points left.

Having just noticed we made her immune to emotional effects, I think I'll also remove the Fearless Advantage. That gives us 4 floating points. I think I will use that to purchase Power Attack, Quick Grab, Improved Critical (Unarmed), and Extraordinary Effort advantages.

Okay, at this point, I'm going to drop Fighting to 6 and increase Presence to 5. I am also going to remove the 4 points increase to Dodge. I am then going to put that 4 points toward Protection increasing her Toughness defense. I am also going to drop Dexterity and Agility each to 4. I think I will also bring her Intelligence down to average. I will then increase Strength by 2 and use the other 6 points for some powers.

You may also note that Immunity, Intimidation, and Insight have ranks more than the Power Level of 10. This is not a terrible problem. The maximum total bonus for each skill is Power Level +12 and Intimidation and Insight are both shy of that. As for powers, those that do not directly impact a Power Level limited bonus like Skills, Attack, Damage, or Defenses can be bought to as many ranks as you want. This is especially true with things like Immunity which is used to represent a cluster of powers. However, it is a fair point to watch out for. That much Immunity can be pretty damn inhibiting. Especially considering the impact of just being immune to Deception.

This will include 3 points of Toughness to max it out. Now she's relatively easy to hit, but she's going to resist almost every thing thrown at her with that incredible toughness score. I could give her some levels of Impervious, which means that if she's hit with an attack that is equal or less to the Impervious rank, then she doesn't even roll to resist it, she just ignores it. Instead, I'm going to give her a Strength-based Damage power.

As a note, the parentheses around the numbers on Strength, Stamina, Fortitude, and Toughness represent the fact that her Strength and Stamina would be reduced if she were to have her rage nullified somehow. That's the disadvantage to Enhanced Abilities. The advantage is that you can apply power modifiers to Enhanced Abilities that you can't to standard Abilities. The same parentheses in the skills represent the die bonus that results by adding skill ranks to the relevant Ability Score. This game was based on D&D 3rd edition, originally, after all. And since Athletics is a Strength based skill, there are two numbers in the parentheses, again in case her strength is nullified somehow. For further note, the effective Ability Ranks are as follows.
Strength 7(10), Stamina 6(9), Agility 4, Dexterity 4, Fighting 6, Intelligence 0, Awareness 4, Presence 4 - 72 points

This is decent enough to represent her around the start of her career now that I'm thinking about it. The regeneration and toughness are much more like she was at mid and late game, but this does show her before she gets a lot of the AoE options she developed later on. So I think this will be good for now.

Also I just realized that I incorrectly noted base Parry as 4 when it should be 6, the same as Fighting. That runs into the problem with the Toughness problem. As such, we're going to drop Protection by 2 again and actually buy some Leaping and Speed to give her some movement. Also, I'm getting a bit leery of that immunity to interaction skills so I'm going to drop those five points into some other things as well. That massive Insight score should be impressive enough ability to defend against that stuff. Being very good at seeing through that stuff is fun but just no-selling it has the potential to be boring.