A Party of Orcs - Princes of the Apocalypse - Session Twenty 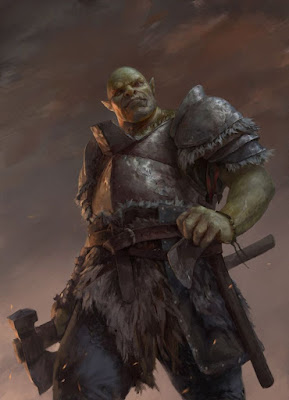 Training and equipping complete for the moment;
The band set off westward with the knights;
Down from the path, returned the missing component;
Talindra fresh from the northern fights.

With Emris newly protected by bulette hide;
The paladin reported on the siege of a homestead;
The Iceshield Orcs had stirred into a tide;
They had swarmed the lands and many farms had bled.

Though for now the orcs were pushed back to the hills;
By virtue of the Emerald Enclave warriors and mystics;
Now they sought one of the many dangerous frills;
Vengeance in the name of their pride suffering pricks.

Marle spent some time rousing high spirits;
Granting vigor and verve through song and blade play;
To fill knights and heroes with higher merits;
To better carry them through any fray.

At the banks of the river the gift of Mystra was exercised;
Through Elivia's mighty and faithful word;
The soldiers with them made haste as advised;
Seeking the roads to travel swiftly to meet fire forward.

Aengus split aside to scout further ahead;
While the party pushed onward for the Scarlet Moon;
The third of the keeps haunted by dread;
In this period the orcs made a move all too soon.

Rather than waiting for the band to be engaged;
They charged forward into the attack;
Stealth was not their strength as they raged;
Seen by all along the heroes' track.

Fennle took the lead to surge forward;
Unfettered by surprise or caution;
Unleashed The blaze of the Sun Soul Order;
Bringing pain to the chief and ash to a coffin.

Marle then acted from a place of concealment;
To place a phantom within an orc's mind;
Of a figure of much violent endowment;
Who asked about luck and a weapon unkind.

The orcs then pressed their efforts;
The chief angered at his following's death;
Applied his axe to the monk's discomforts;
While other charged to end Emris's breath.

This did not go well for the orc warriors;
Slain by Talindra's blade and Emris' hooves;
The paladin charged past their barriers;
To strike before another enemy moves.

The orcs pressed forward on their goals;
One passing through phantasmal Harry;
And others charging Talindra in rolls;
But for every strike there was a parry.

Elivia called out to Mystra's glory;
Calling down a hand of spiritual might;
To add her divine might to the battle gory;
And then reach for the chief to smite.

Then about her a host of angels appeared;
Which assaulted the orcs horde;
The savages managed not to be smeared;
And one succeeded in not being gored.

From the shadows, Lohn steps out;
To bend their new longbow to the test;
And draw from the chief blood in a spout;
Though still he did survive their best.

Still more orcs moved then to the fray;
One having seen the locksmith's position;
But the duergar's new armor did stay;
The blow from adding to the attrition.

Fennle whipped her spear back and forth;
Slaying one orc behind her;
And attacking the chief for all her worth;
Still he weathered the blur.

Marle darted away like a startled crow;
As she bid farewell to the disappearing phantasm;
She released a bolt from her crossbow;
And called out to the monk barring her from the chasm.

The orcs weathered past the host of angels;
To strike at the half-elf and aasimar;
Though the paladin's shield held all angles;
And kept them from going far.

The orc chief continued his exchange with Fennle;
The weight of his axe slamming into her ribs;
But when it came time to deliver the slash fatal;
The monk managed to slip his grips.

Talindra and Emris retaliated against their foes;
Striking left and right with all their might;
The orcs number dwindled under the blows;
Driving closer the end of the fight.

The long suffering orc pursued the tiefling;
Chasing her around a boulder;
But with a motion most aggravating;
The bard had gotten out of reach of danger.

Elivia cast out a word of faith and healing;
Sent to bolster Fennle against assault;
Before reaching down with a grip shocking;
To strike through the orc's iron vault.

The member of union 271 reached out;
And gave the orc a taste of the rainbow;
Before slipping away from the bout;
Leaving the orc blinded and aglow.

Trading blows with each other once again;
Fennle and the orc whittled each other to the edge;
As Marle gave her foe a Rezur grin;
The two stared across at each other over bloody ledge.

Emris charged forth trampling under-foot;
A last orc as he carried his rider and the clerical sage;
To strike the chief where he stood hard put;
And slew him in a burst of fey sparkles that were not beige.

The last orc fought past the blindness just too late;
As arrows struck through to his heart;
And sent him spiraling to Kelemvor's gate;
To await his call to Gruumsh's realm apart.

Clearing the orcs pockets took little time;
As Talindra confirmed their origin to the others;
They continued north while Marle plyed her rhyme;
And they awoke to find one another.

They pressed on to find the hold of the fire cult;
An old cult in ruined walls atop a hill;
Patrolled by hell hounds and warriors occult;
And at the top was a wicker man in which flames did fill.

They waited for Aengus to join back with their lot;
As they planned their coming approach on the Eternal Flame;
While in the hills the Knights of Samular faced the plot;
Then they settled to their work out the paths of their aim.
at July 20, 2017