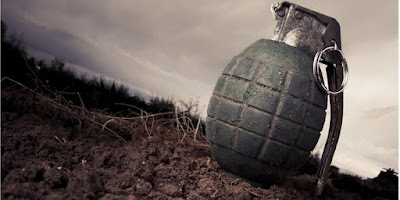 Tabasssum Wazir looked down from the action to the camera and noticed a black screen remembering something about the camera...namely that it was digital.

"Ah, fuck." Out loud he called out. "Hey, Hilde, I'm sorry, but the camera is digital! I'm sorry, everything is ruined."

Hilde growled from where she was being crushed in a giant gorilla's hand. "Oh, that's just it!" She struggled and pushed herself free to twist away and force the clattering Voltron imitation into an awkward angle before it twisted about, canceling out her efforts almost casually before tossing her across the battlefield. The sound of someone cheering her on, drew Hilde's eyes below to see where Hayden was calling out towards her and managing a rather amazingly acrobatic cheer routine.

Aside from that, Hayley pulled off away from the gun and moved toward's Solveig's side to start treating her injuries. She was used to being able to treat minor injuries almost without effort, but now she was finding that level of ability floating just a little bit out of her reach. Still, she was able to treat the woman's injured arm well enough.

Hilde lost sight of what was going on below, though she did hear the sound of gunfire erupting from below along with the squealing of gears in what seemed to be an impression of a roar of some kind.

"No, no, no!" she commented. "I'm taking my axe back and ramming it in this mecha-kong-mini's head!"

So saying she caught hold of a light post and used it to redirect her momentum back towards the gorilla. She flew a bit off kilter and slammed into the monster, knocking it off-balance.

Then her axe started pulling away.

Time seemed to pass in slow motion as she reached out the axe slipping and tumbling away from her as she slammed hard into the ground and watched it scatter across the scene. She tried to climb back up to her feet and chase after the axe only to have the grate ape behind her torn to shreds by covering fire from Lauren and Solvieg. With a disappointed sigh she shrugged, shoulders slumping and turning back.

"Damn. I almost had it." Yelling back she continued. "I think I sprained my ankle!"

"I think you sprained your brain!" Solveig responded.

"Oh, no, that's normal," Taba assured the hovercraft pilot. "For her anyway."

"I'm pretty sure it's just the ankle," Hilde called back. "Doesn't feel like a full concussion yet!"

While Hayley started to attend to Hilde, the djinn tried to get the camera to work, but without much in the way of technical skill, they didn't have much look and ended up smashing the camera into the ground."Hilde, we've got nothing!"

"Damn it, that was good footage," the Aesir noted as her ankle was bandaged up. "There were some choice action bits in that."

"Didn't you sign an NDA?" Hayden asked. "How do you expect to be able to use any of this?"

Solveig and Lauren shared a look before they started poking around the hovercraft. "So I'll focus on the hovercraft and you try to get us some communication?"

"That sounds good to me."

Unfortunately, things didn't go quite that well as they had hoped and the vehicle and its communication gear began to emit ominous blue smoke before starting a somewhat spectacular melt down.

"We can always walk," Hilde suggested.

"Excuse me, you were up on top of the hovercraft and didn't notice how fast it was traveling?" One of the red-heads asked, Hilde thought it was the third one.

"More like a week, without communication with the other side."

"Let's just look around for this guy we're supposed to meet and then try to work out some more reliable method of communication later. Let's get the flares and just make a signal."

"Errm, you mean the flares we left with Mike?" Hayden asked,

"What?" Solveig retorted as several people exchanged blank looks. Her mouth started to twitch then as she took a deep breath and then spoke. "Okay, I'm about to do something, but you must all immediately forget everything about it. Nothing happened. Nothing is going to happen! At all. Just, erase it from your mind."

Following that, the young woman started calling out in Ancient Greek before lighting up in a series of blinding flashes. While she couldn't quite get the meaning of what was said, the method did spark something in Hilde's thoughts.

"What was that?" Hayden asked, trying not to freak out.

"That was nothing," Solveig said, turning to look sharply at Hilde and Hayden. "Nothing happened. At all. We're just going to go and get on with the mission."

"So does that make you Apollo's kid or something?"

"What's she talking about it?" Hayden asked, indicating Hilde.

"I don't know," Solveig reiterated. "Because nothing happened for anybody to talk about."

It was a few minutes later that they noted the flashing of a light directed their way. It was a clear signal despite not having any code to it. Gathering up what could be gathered, the band started moving in that direction, not long after coming to the sight of a crash or battle of some sort with a number of various destroyed clockwork men swarming over the remains of a hummer.

Curious more than cautious, Hilde limped over to see what there was to find in the collection, and pushed aside a clockwork figure and seeing a grenade tumble out in front of her. This wasn't the first time that she had been presented with an explosive in her immediate path and about to explode, but for some reason, she simply froze and stared at it just long enough to watch the handle bounce off and the explosion to blossom into reality. 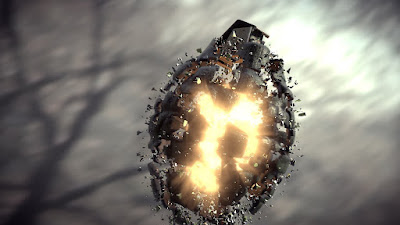 "Holy shit, Hilde!" Taba shouted, moving to where she had been tossed by the explosion and trying to stop her from standing up. "Stay down? Are you okay?"

She shakily raised a hand with a thumbs up. "Hey, I can still move! Owwwwww."

"Stop being such an idiot! Damn it, we'll have to carry her now."

"Don't worry, I can help her walk for a bit until we can get to a safer place to rest," Taba assured them. "But you're going to owe me for the dry cleaning."

It was a bit harder for Hilde to follow along with the action while her body was basically a network of bruise city states uniting to form a bruise empire, but she did note as Lauren and Solveig found a series of traps leading up to the top of the tower they had been signaled from. It looked like the promise of a long, slow climb up a several trapped ascent save that one of the walls caved in, revealing another way up that had until that moment been obstructed from view and access.

Hilde wasn't entirely sure how many floors they climbed upwards. She generally found they went by faster if you didn't count them specifically. Especially when everything was sort of blending together into pings of pain and fuzziness. Eventually, however, they were stopped by an authoritative voice.

Hilde leaned back against a wall and gave Taba a thumbs up as the djinn stretched out some kinks from carrying her up those flights of stairs. The conversation fuzzed in and out a bit, though when Taba or one of the other people in the Band turned to look at her she maintained enough presence of mind to give a broad smile and a thumbs up.

As it turned out, Daniel was about as bad off as she was. There was an injury to his gut that definitely looked like it needed some treatment, though he done a decent patch job himself. At least he wasn't apparently actively dying. But from the sounds of it the last member of the first team and been taken by somebody else. A massive angel thing that kept knocking over the tower of towers the clockworks were trying to build.

"I think at first we might want to re-convene at a slightly more secure campsight. Well, maybe just better armed. and less prone to getting trapped in a corner." Solveig looked around a bit. "And probably look to address certain injuries as well."


The Epic of Hilde Sifgard