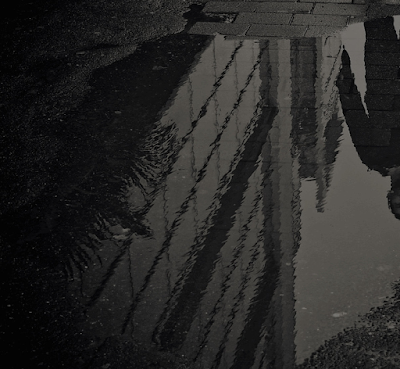 She should have been a bit more cautious when she was looking into the facial recognition software. She'd left tracks and there was a bit of disapproval coming down her way. Loose cannons weren't to be tolerated and she should stick to doing only the investigations that she was asked to do.

The voice was not taunting. It was disgusted. But it was in the right place, it was behind her talking over the voice of Dr. Christian.

She moved forward, trying to walk calmly and away, sometimes that worked to leave it behind. But it stayed close this time. It pursued. Keeping her pace calm and ordered was difficult. Most difficult. As the detective came in and asked for her to give a statement as to what had occurred, offered to backdate a software request.

Do what they want? Aren't they your prey?

The voice was continuing to express is intense distaste for her behavior. But the detective had seemed on the level. There was a murder that he was investigating and as far as she could tell, his emotional response was just fatigue and resignation. There was no wrath of fear of discovery from what she could tell, just irritation.
You find excuses.

There was a clacking sound just at the side of her ears, claws clicking against each other maybe. Just a clack, clack, clack in the mist that urged her to turn around and look back. But she was determined not to. It wasn't really there. This was just a dream.
Excuses not to hunt. Excuses not to feed. Excuses not to be who you are meant to be.

The image shifted to show the return of the players in the previous night's events. The driver of the car, the reporter that was always in the coffee shop. The guy that had just been in the area, and Alejandro Tassis. She couldn't hear what was said in the warped surfaces of the mist shrouded mirrors.

The whispers were too loud. And her heartbeat was too fast. And the echo of her footsteps cracking the mirrors beneath with each step traveled everywhere.

So weak. So Stupid. I'm catching up to you.

-----
She snapped awake and looked around her nervously.